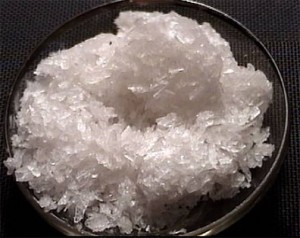 OMAHA, Neb. (AP) — A federal appeals court has upheld an Omaha man's sentence of nearly 32 years in prison for his role in a drug ring run by a neo-Nazi group operating in Nebraska and Iowa.

Stanek pleaded guilty to conspiring to distribute more than 500 grams of methamphetamine and using a gun as part of drug trafficking. Stanek is one of eight men who pleaded guilty to gun and drug charges tied to the group.

Court documents say the men sold marijuana and methamphetamine in the Omaha area in 2009. Some were also accused of stealing drugs in home invasions.

Violence: Sheriffs of Los Angeles and Orange counties say it is the fastest-growing such hate group in the state and is linked to the distribution of speed

A hate group discovered in Costa Mesa six years ago is now believed to be the fastest-growing white supremacist gang in California and a major player in the methamphetamine drug trade, according to a report released Thursday.

The study, the most extensive to date of the Nazi Lowrider gang, was prepared by the Anti-Defamation League using state and federal crime data. It was presented Thursday in Santa Ana by Sheriffs Lee Baca of Los Angeles County and Mike Carona of Orange County. They said the Nazi Lowriders are a rising force in street crime and drug sales and have been involved in several high-profile hate incidents in both counties.

Carona and Baca consider the gang so dangerous that they have segregated Nazi Lowriders in county jails from other prisoners after repeated attacks by members on black inmates in Los Angeles.

Members of the hate group allegedly attacked a 12-year-old Latino boy with metal pipe in 1996 at a Mission Viejo video arcade, police said. More serious incidents followed in Lancaster, where over the last three years Nazi Lowriders have been accused of beating a black teenager with a baseball bat and stabbing a black man several times in the back.

Carona and Baca also expressed concern that the group might be attempting to unite other white supremacist gangs. "It's a menace we all have to attack," said Baca, who said the Nazi Lowriders are now more of a problem in his jails than the Mexican Mafia.

The group first caught the attention of authorities in Costa Mesa, where members were running a drug ring. Gang membership grew from 28 in 1996 to an estimated 1,300 nationwide in 1998, according the the study.

Unlike traditional street gangs, the Nazi Lowriders and other white supremacist groups do not carve out specific territory, hate-crime experts said.

"They are not typical of skinhead organizations and not well defined like the Ku Klux Klan or Aryan Nations," said Chris Freeman, a research associate for the Atlanta-based Center for Democratic Renewal, which monitors far right-wing groups.

"They are roving gangs," Freeman added. " 'Street soldiers' is the term used by white supremacists to refer to them. They hit and they leave and they are hard to track and pin down."

The group has created its own culture, the study found, including hand signals, language and dress codes. Members' bodies are often tattooed with swastikas, pictures of Adolf Hitler and other Nazi imagery, it stated.

According to the report, members are typically in their late teens or early 20s. To join the gang, they must profess loyalty to the white race. Though they express hatred for Jews, Asians and other minorities, the gang tends to focus its hatred on blacks, the report said. In prisons, the gang often allies itself with Latino counterparts in attacks on black inmates.

Tom Leyden, a former neo-Nazi skinhead who is now a consultant for the Simon Wiesenthal Center in Los Angeles, said the gang is unique in that it operates under dual philosophies. It combines drug-selling expertise with the primarily hate-based credo of skinhead gangs, he said.