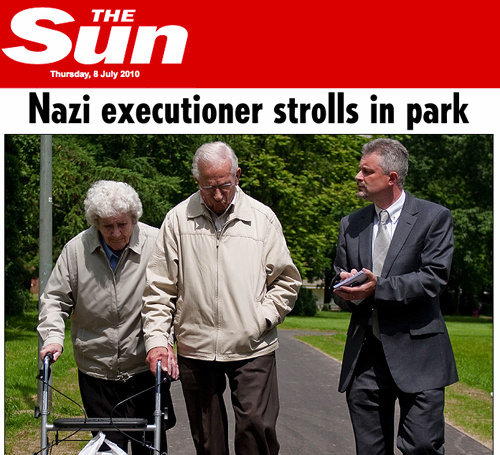 (CNN) — Dutch prosecutors asked Germany on Thursday to hand over a fugitive Nazi war criminal who escaped from prison nearly 60 years ago, they said.

Klaas Carel Faber, now 88, was convicted in 1947 of killing Jews at the Westerbork transit camp during the Holocaust and sentenced to death. But the sentence was commuted to life in prison on appeal, and in 1952 he escaped prison and fled to Germany, Dutch prosecutors said.

Faber is on the most-wanted list of the Nazi-hunting Simon Wiesenthal Center.

Born in Haarlem, the Netherlands, Faber later became a German citizen and fled to Breda, Germany, after his escape. The Dutch have repeatedly asked for him to be extradited, prosecutor Reinoud Den Haan told CNN.

“This is not the first time we have tried to get him sent back,” he said.

“In 1952 and 1957 we asked Germany to hand him over but they refused, arguing that Mr. Faber was a German citizen. Also in 2004 we requested that he serve in a German jail, but we were also denied that,” Den Haan said. German law has in the past barred the extradition of German citizens in some cases, the Foreign Ministry said, but there have been changes to European law recently.

The Dutch are now requesting him under a European arrest warrant, a procedure they have never used before in the case, Den Haan said.

“All efforts to have (Faber) prosecuted in Germany have hereto been unsuccessful, although the German authorities have indicated a willingness to reexamine the case,” the Simon Wiesenthal Center said in its 2010 report on Nazi war suspects still at large.

He said it was usually “lack of political will,” not the age of the suspects, that is “the biggest obstacle to prosecution.” …

Jim Jones and the People’s Temple in Indianapolis
Nov 25