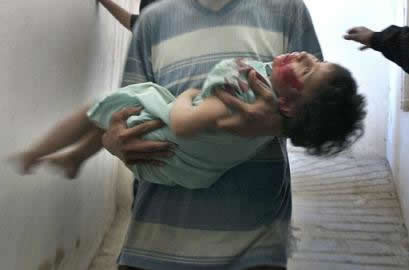 On August 31, declaring an “end to the combat mission in Iraq,” Obama disgracefully said: “Through this remarkable chapter in the history of the United Stated and Iraq, we have met our responsibility,” infamously displaying his culpability as a war criminal, matching the worst America ever produced. Daily he proves it in Iraq, Afghanistan, and by reckless global marauding.

During its September Geneva session, the UN Human Rights Council’s (HRC) 15th Session issued a report titled, “Testimonies of Crimes Against Humanity in Fallujah: Towards a Fair International Criminal Trial,” citing the deteriorating conditions in the city and saying:

“From the (2003) outset and at the start of the indiscriminate and merciless campaign of collective punishment and willful destruction, undertaken by the occupational troops of the United States of America,” innocent civilians endured an “inhumane siege and indiscriminate killing” during April and May 2004.

“The genocidal massacres” included “sustained and targeted bombing(s), aimed directly at the homes of defenseless civilians,” killing and maiming dozens on the bogus pretext of “pursuing the leaders of the resistance.”

On April 23, with Baghdad occupied, Fallujah students protested peacefully against their school taken over for a base. In response, US soldiers “fired indiscriminately,” killing 13 and wounding 75. Medical workers trying to help were also shot. Among the dead were three children under age 11.

On April 30, US forces fired on a funeral, killing two civilians and wounding 14, including children.

On September 11, US and Blackwater forces “opened fire on the office of the mayor of Fallujah.” An Iraqi Fallujah Protection Force (FPF) and two police patrols chased their vehicle until it entered a US camp 3 – 4 km away. They returned later, attacked the FPF, killing eight and wounding two. Ambulance services were also fired at to prevent them from providing aid.

Neighborhoods were attacked, a woman, trying to protect her baby, said a mad dog bit her. Soldiers also stole “money and jewels of families to prove that it’s a mercenary army before it’s an occupation” one.

On April 4, 2004, the Fallujah US Marine commander told City Council members that military action was coming against “insurgents who presumably killed four contractors,” despite negotiations to resolve the matter peacefully. Fallujah residents were told not to leave the city, or if necessary for food or medicine to wave a white flag for US troops.

However, it was decided to besiege the city, prevent food, medicine and other supplies coming in, “thus violating the Geneva Conventions that explicitly prohibit” starving civilians and preventing them from leaving. The worst followed, including random bombing and rocket firing, (including cluster bombs, white phosphorous, and other illegal munitions), killing and wounding thousands and displacing thousands more. Widespread destruction of homes and property also occurred.

In addition, “collective punishment took the form of American snipers targeting any moving body, killing innocent civilians, young and old,” including men, women, boys and girls. Moreover, sick and wounded civilians “were prevented from reaching the hospital by cutting off the bridge connecting the city to the general hospital. This is an egregious crime under international humanitarian law.”

ICRC doctors and relief experts were prevented from entering the city to provide aid. A November 10 statement said thousands of elderly, women, and children had no food or water for days, besides no access to medical help. To prevent word getting out, US forces kept journalists out of the city during military operations.

Afterwards, the city’s football stadium became a burial ground for thousands of dead, and those losing homes were sheltered in schools.

One of many other incidents was as follows: a US F-16 bombed 30 civilians displaying white flags while trying to escape. The pilot was ordered to kill them. …