By DEVLIN BARRETT and NEDRA PICKLER 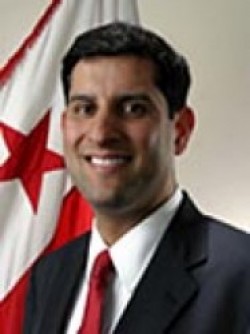 WASHINGTON (AP) — An aide to President Barack Obama is on leave from his White House job after the FBI raided his old District of Columbia government office Thursday, arresting a city employee and a technology consultant on corruption charges, a White House official said. The charges were lodged against the two men at a federal court hearing as the FBI finished searching the city's technology office, which was led until recently by Obama's new computer chief, Vivek Kundra.

Kundra is on leave from his White House job until further details of the case become known, according to a White House official speaking on condition of anonymity because the official did not want to publicly discuss personnel matters.

At the court hearing, Yusuf Acar, the acting chief security officer in the city's technology office, was ordered held without bond pending a hearing Tuesday. Prosecutors said $70,000 in cash was found during a search of Acar's Washington home and that he posed a serious flight risk.

Technology consultant Sushil Bansal of Dunn Loring, Va., was released but was ordered not to conduct overseas financial transactions or leave the Washington metropolitan area. Bansal is due back in court on April 21, and prosecutors said they were hopeful that a plea agreement could be reached in his case.

Acar worked under Kundra, Obama's pick to coordinate federal computer systems. Obama spokesman Robert Gibbs would not say whether the White House knew the investigation was under way when it named Kundra last week, but called the case "a serious matter."

Mafara Hobson, a spokeswoman for Washington Mayor Adrian Fenty, said she was "very confident" Kundra is not a target of the investigation.

Bansal's lawyer, David Lamb declined to comment. It was not immediately clear who would represent Acar in the case.

Acar, a 40-year-old native of Turkey, had a $127,468-a-year position purchasing the city's computer equipment and lining up contract workers for numerous city agencies, according to court documents.

Authorities say Acar and Bansal, along with others, defrauded the government through a variety of schemes, including billing the city for items that were never delivered and "ghost" contract employees who did not work. The scheme involved Acar approving falsified bills and splitting the money with vendors including Bansal, who submitted them, court documents alleged.

Bansal, a native of India who turns 42 next week, is a former city employee and the founder and chief executive of Advanced Integrated Technologies Corp. The company has offices in Washington and India and did more than $13 million in business with the District of Columbia government in the past five years, according to court documents.

One contract involved providing computer support for the city's Department of Motor Vehicles. The company also was given a contract to upgrade the city's human resources computer records and sold virus detection software to the city.

In August Bansal was named entrepreneur of the year by the Association of Indians in America.

An FBI affidavit supporting the arrest warrants indicates that several other businesses and individuals were involved in the alleged schemes, but the other people are identified only by their initials.

The FBI worked with another employee in the city's technology office, who was in on the scheme and secretly recorded conversations with Acar and Bansal as part of the investigation.

In 2007, federal investigators uncovered a massive embezzlement scheme in the city's tax office.

Men and women dressed in suits and wearing latex gloves could be seen entering and leaving the glass-enclosed lobby of the Office of the Chief Technology Officer on Thursday afternoon.

Even as the raid was taking place, Kundra was giving a speech at FOSE, an annual government technology expo. Kundra said part of his focus is to change the way the government buys technologies from vendors.