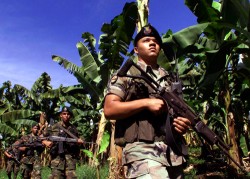 Colombian army soldiers patrol a banana plantation in Santa Marta, Colombia, in December 2000. At the time, there were worries of violence over new banana trade practices with the European Union. The crop, which is a major export for Colombia, has often been a cause for violence over trade agreements and labor issues.   (Luis Acosta/AFP/Getty Images)

In his State of the Union speech, President Obama argued that the U.S. could return to prosperity by doubling its exports within the next five years, thereby creating two million new jobs.

While outlining this bold idea, ably dismantled on this site by Michelle Chen a few weeks ago, Obama mentioned finalizing trade deals with Colombia, Panama, and South Korea. Each of these proposals are problematic in their own right, and suggest a deeply disturbing turn away from Obama the populist candidate.

But in the case of Colombia, where U.S. firms have made payments to right- and left-wing death squads to protect their interests, it also seems to indicate an abandonment of human rights principles—and inadvertently placed the spotlight on Attorney General Eric Holder, formerly Chiquita's top legal counsel.

…[R]ealizing those benefits [of trade] also means enforcing those agreements so our trading partners play by the rules. And that's why we'll continue to shape a Doha trade agreement that opens global markets, and why we will strengthen our trade relations in Asia and with key partners like South Korea and Panama and Colombia.

But in glaring contrast with his campaign rhetoric and the sentiment of the vast majority of Americans, Obama failed to clearly establish social justice goals and labor rights as crucial goals of trade policy. ("Trade" increasingly means the export of capital and jobs to off-shore sites and the import of finished products back into the U.S., as American workers and factory towns are devastated with little realistic prospect for recovering the lost wages and benefits.)

SOME 2,500 UNIONISTS KILLED IN COLOMBIA

Colombia is the most dangerous nation in the world for trade unionists. According to Human Rights Watch, about 2,500 unionists have been slain there since 1985. But despite this, U.S. corporations and leading "liberal" media (NY Times, Washington Post, etc.) have almost unanimously promoted a NAFTA-style "free trade agreement" with Colombia.

However, Charlie Cray*, director of the Center for Corporate Policy, has dug up some compelling new  connections between U.S. corporations, Colombia death squads, and the U.S. government.

American firms operating in Colombia, most notably Chiquita, have made payments to both right-wing death squads and the fanatical left-wing guerilla group FARC. While the vast majority of civilian slayings are widely attributed by human-rights groups to rightist groups like the AUC, Chiquita is being sued over its payments to FARC, which tragically killed four American missionaries who actually appeared to be sympathetic to progressive reform in Colombia.

Chiquita, like other U.S. corporations such as Dole and Del Monte, who also operate plantations in Colombia, has contended that it merely paid extortion to both the FAC and AUC in order to protect its employees.

However, according to former AUC leaders who have admitted their crimes as part of a "Truth and Justice" process aimed at ending Colombia's long-running internal war, Chiquita's payments were not exactly designed to "protect" union leaders and land reformers.

One of the ex-paramilitaries -- Jose Gregorio Mangones Lugo (aka "Carlos Tijeras") -- was the former commander of the William Rivas Front of the United Defense Forces ("AUC") -- the group that operated in northern Columbia, in the zone where the companies and their suppliers grew bananas....

Tijeras described the AUC's relationship with the multinational banana companies as "an open public relationship" involving everything from "security services" to the kidnapping and extrajudicial assassination of labor leaders fingered by the companies as "security problems."…

Once the FARC was vanquished and order restored, the banana companies continued to pay the AUC to "pacify" their work force, suppress the labor unions and terrorize peasant squatters seeking their own competing land claims.

As Tijeras himself revealed:

In most cases those executed were union leaders or members or individuals seeking to hold or reclaim land that Dole or Chiquita wanted for banana cultivation, and the Dole or Chiquita administrators would report to the AUC that these individuals were suspected guerillas or criminals.

Other U.S. corporations charged with making similar arrangements have been Coca-Cola (which had a close relationship in Guatemala with anti-union death squads, as Business Week exposed), Occidental Petroleum, ExxonMobil, and Drummond Co., an Alabama-based mining firm.

But the Chiquita case is of huge significance not just because of the collusion between corporations and death squads that it exposes. It also leads up to America's top cop—U.S Attorney General Eric Holder.

Cray's research has produced a real shocker: U.S. Attorney General Eric Holder was Chiquita's top legal counsel while much of the above was taking place. As Cray states:

When he was Chiquita's attorney, Eric Holder told the Washington Post that it would be unfair to treat any company "harshly" that voluntarily discloses payments to designated terrorists, and that if the company is penalized, the individuals within the firm should not be.

Yet just a few years before he first passed through the revolving door, when he was Deputy Attorney General, Holder himself had authored a famous corporate crime policy memo (known as the "Holder Memo") which suggested that the "prosecution of a corporation is not a substitute for the prosecution of criminally culpable individuals within or without the corporation."

At this point you'd think Holder would automatically and very publicly recuse himself from any decision concerning the requested extradition of Chiquita execs (would the U.S. tolerate it if a government official tied to the cartels blocked an extradition request?) or any other matter related to the investigation of multinational complicity in violence in Columbia.

But Holder has yet to take this step. It looks like it will require pressure from either Obama or Congress.

And while Obama and Congress are considering the Chiquita-Colombia connection, they should seriously contemplate how "free trade" increasingly means the export of capital and jobs to off-shore sites and the import of  products back into the U.S.—products sometimes built on the grisly work of death squads.