Shower Posse: What About Wall Street Accomplices to the Jamaican Drug Trade?

Also see: “How the CIA Created Jamaica’s ‘Shower Posse’ (and Sent a Death Squad to Shoot Bob Marley & his Family)” 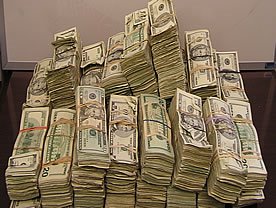 When we talk about the Jamaican drug gangs we can’t act as if U.S. players are not involved in facilitating their drug trade. In the past, I personally forwarded information for the FBI, with no success, to investigate.

Brief background: In past columns, such as “Ex-Wall Street Trader’s Shadow Raises Questions In Canada,” which was published in The Black Star News on November 27, 2007, I detailed the money laundering activities of Robert VanCaneghan, a former member of the Board of the American Stock Exchange. In “Why Ravitch Should Resign Before Paterson,” which was published on March 3, 2010, I detailed the sexual assaults on African-American women on Wall Street by Richard Monderine, an Amex supervisor, and similar attacks perpetrated by VanCaneghan. In other articles I have discussed involvement in drug smuggling and money laundering by Louis Miceli, a member of the Amex Board. Previous Article
General George S. Patton was Deeply Anti-Semitic & Believed in Superiority of the ‘Nordic Race’
Next Article
Pat Tillman Murder Investigator in 2006: It "Doesn’t Matter" who Killed Him, the Family was Only Making an Issue of Case Because they "Aren’t Christians"

Pat Tillman Murder Investigator in 2006: It "Doesn’t Matter" who Killed Him, the Family was Only Making an Issue of Case Because they "Aren’t Christians"
Sep 09