Pat Tillman Murder Investigator in 2006 – It "Doesn’t Matter" who Killed Him, the Family was Only Making an Issue of Case Because they "Aren’t Christians" 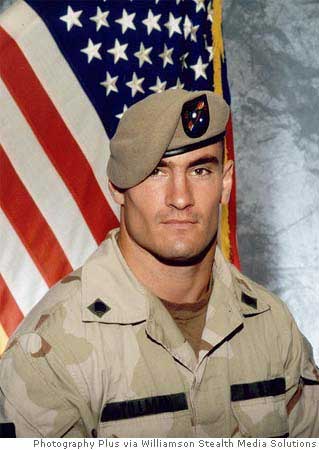 ... According to the Army officer who directed the first official inquiry, the Army might have more of a clue about the shooter's identity than it has let on. Asked whether ballistics work was done to identify who fired the fatal shots, Lt. Col. Ralph Kauzlarich told ESPN.com, "I think, yeah, they did. And I think they know [who fired]. But I never found out."

Mansfield and other Rangers who attended the post-incident meeting said — both in interviews with ESPN.com and in documents from the Army investigations — they were advised by debriefers that night that the unit as a whole bore the responsibility for Tillman's death and they should avoid placing blame on any one person.

In his interview with ESPN.com, Kauzlarich also said he was not driven to identify Tillman's killer.

"You know what? I don't think it really matters," Kauzlarich said. "And the reason I say that — you got to look at the overall situation here that these guys were fighting in. And somebody hit him. So would you hold that guy [who] hit him responsible for hitting him, when everybody was shooting in that direction, given the situation? We'll see how the [Defense Department Inspector General's] investigation comes out. But I had no issue on not finding a specific person responsible for doing it."

Kauzlarich said he is confident the current probe will not result in criminal charges against the shooter or shooters. He said investigators would not still be examining the incident at all if it were not for Tillman's NFL celebrity — he walked away from a multimillion-dollar contract with the Arizona Cardinals when he enlisted — and the pressure brought to bear by Tillman's family on a number of Washington politicos.

"His parents continue to ask for it to be looked at," Kauzlarich said. "And that is really their prerogative. And if they have the right backing, the right powerful people in our government to continue to let it happen, then that is the case.

"But there [have] been numerous unfortunate cases of fratricide, and the parents have basically said, 'OK, it was an unfortunate accident.' And they let it go. So this is — I don't know, these people have a hard time letting it go. It may be because of their religious beliefs."

In a transcript of his interview with Brig. Gen. Gary Jones during a November 2004 investigation, Kauzlarich said he'd learned Kevin Tillman, Pat's brother and fellow Army Ranger who was a part of the battle the night Pat Tillman died, objected to the presence of a chaplain and the saying of prayers during a repatriation ceremony in Germany before his brother's body was returned to the United States.

Kauzlarich, now a battalion commanding officer at Fort Riley in Kansas, further suggested the Tillman family's unhappiness with the findings of past investigations might be because of the absence of a Christian faith in their lives.

In an interview with ESPN.com, Kauzlarich said: "When you die, I mean, there is supposedly a better life, right? Well, if you are an atheist and you don't believe in anything, if you die, what is there to go to? Nothing. You are worm dirt. So for their son to die for nothing, and now he is no more — that is pretty hard to get your head around that. So I don't know how an atheist thinks. I can only imagine that that would be pretty tough."

Asked by ESPN.com whether the Tillmans' religious beliefs are a factor in the ongoing investigation, Kauzlarich said, "I think so. There is not a whole lot of trust in the system or faith in the system [by the Tillmans]. So that is my personal opinion, knowing what I know."

Asked what might finally placate the family, Kauzlarich said, "You know what? I don't think anything will make them happy, quite honestly. I don't know. Maybe they want to see somebody's head on a platter. But will that really make them happy? No, because they can't bring their son back."

Kauzlarich, now 40, was the Ranger regiment executive officer in Afghanistan, who played a role in writing the recommendation for Tillman's posthumous Silver Star. And finally, with his fingerprints already all over many of the hot-button issues, including the question of who ordered the platoon to be split as it dragged a disabled Humvee through the mountains, Kauzlarich conducted the first official Army investigation into Tillman's death.

That investigation is among the inquiries that didn't satisfy the Tillman family.

"Well, this guy makes disparaging remarks about the fact that we're not Christians, and the reason that we can't put Pat to rest is because we're not Christians," Mary Tillman, Pat's mother, said in an interview with ESPN.com. Mary Tillman casts the family as spiritual, though she said it does not believe in many of the fundamental aspects of organized religion.

"Oh, it has nothing to do with the fact that this whole thing is shady," she said sarcastically, "But it is because we are not Christians."

After a pause, her voice full with emotion, she added, "Pat may not have been what you call a Christian. He was about the best person I ever knew. I mean, he was just a good guy. He didn't lie. He was very honest. He was very generous. He was very humble. I mean, he had an ego, but it was a healthy ego. It is like, everything those [people] are, he wasn't." ...