From: Just Another Blog (in LA) 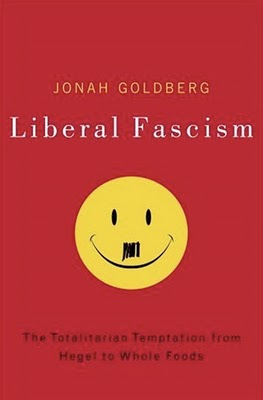 Wandering through the wilds of the Amazon, we again encountered Doughy Pantload's latest (Or is this his first?) hardcover excrescence, Liberal Fascism: The Totalitarian Temptation from Hegel to Whole Foods. The good news (for Jonah) is that they've finally replaced "Hillary Clinton" w/ "Whole Foods" on the low-resolution image of the cover. The good news (for humanity) is that the publication date has been pushed back again, although only by a week, to 8 January 2008. Expect it to see the light of day by about March of next year, then.

Buy this book with The Enemy At Home: The Cultural Left and Its Responsibility for 9/11 by Dinesh D'Souza today!

Oh, Sweet Blood of Jeezis! Those liberal fascist secular-progressives!! It's all their fault!!!

The quintessential Liberal Fascist isn't an SS storm trooper; it is a female grade school teacher with an education degree from Brown or Swarthmore.

These assertions may sound strange to modern ears, but that is because we have forgotten what fascism is. In this angry, funny, smart, contentious book, Jonah Goldberg turns our preconceptions inside out and shows us the true meaning of Liberal Fascism.

Forgotten what fascism is? Take a look at Blackwater. True meaning of "Liberal Fascism?" There is no such thing. Fascism involves state & corporate power combining to render the individual citizen a powerless cog in the corporate machine. That's why "conservative fascism" would be redundant, and there is no "liberal fascism." We haven't looked at Goldberg's Tuesday L. A. Times column yet, but it will doubtless be an equally stupid exercise. Not going to link to it, but it's (surprise) more culture warrioring. And as stupid & ignorant as expected. How does he do it?

JJRousseau, you wouldn't know a Fascist if it bit you on your butt. "Fascist" is such an overworked word on the left that it has no meaning anymore except that you think the person is "mean." And we all know from the childish bumper sticker that "mean people suck." Actually Fascism and Nazism, as in National Socialism, are left-wing ideologies, (yes, that's right Mussolini and Hitler were leftists) so please spare us your ignorance and stupidity.October 02, 2007 1:15 PM

So mean people don't suck? Yep, Mussolini & Hitler were leftists alright. That's why Hitler came to power railing against "Jewish-Bolsheviks" & attacked the Soviet Union. (Might've won the war if he hadn't, but he did.) Big "leftist," alright. Turned Germany into a worker's paradise by turning control of the means of production right over to the proletariat, just as soon as that Bolshevik burned down the Reichstag, didn't he? Mussolini may have been some sort of socialist when he started, but he soon enough found where the power was & went right to it. Jesus fucking Fuck, is it any wonder we despise right wing fools? "Spare us your ignorance and stupidity," our ass!! Talk about the Big Lie. Hope you're proud of yourself, Goldberg.