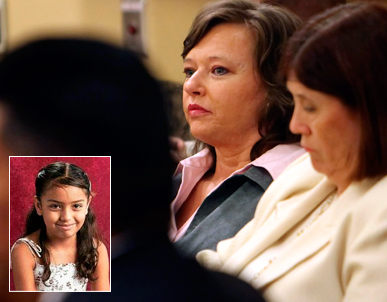 ​Shawna Forde, he notorious anti-immigration vigilante, is currently on trial in Arizona for the 2009 murder of nine-year-old Brisenia Flores and her father in Arizona, and stands charged with first-degree murder. Her alleged accomplices, Jason Bush and Albert Gaxiola, will face the same charges come March and June, respectively. On Monday, we wondered why the case was not getting attention from the national media, especially considering the recent killing of another nine-year-old girl, Christina Taylor Green, in Jared Loughner’s attempted assassination of Rep. Gabrielle Giffords, also in Arizona. As new details emerge from the trial, the story gets more and more terrifying, and still too few people are paying attention.

The At the Courthouse blog of the Arizona Daily Star is providing dispatches from the trial. Yesterday, Flores’ mother, Gina Gonzalez, who was also shot, took the stand:

Brisenia demanded to know why the man had shot her father and when she realized it was her mom on the floor near the couch, she wanted to know why he’d shot her mom, too, Gonzalez said.

“He’s all out of bullets because he used them on me and Junior and he stands there and he loads the gun right in front of her,” Gonzalez sobbed. “I can hear her say ‘Please don’t shoot me.”

Gonzalez said she heard the shot and saw her daughter go flying back. She then heard the second shot.

The prosecutors say Forde believed Raul Junior Flores, Brisenia’s father, was “a drug dealer and they decided to rob him of guns, drugs and money to fund the Minuteman organization founded by Forde.”

The defense, meanwhile, hopes to discredit Gonzalez’s testimony with confusion over whether or not the woman involved in the home invasion was wearing a wig:

[Gonzalez] explained that when the woman first came into her home her brownish-blonde hair was down, but when she came back a short time later, it was slicked back into a small pony tail.

When Larsen pointed out that Gonzalez never, ever mentioned the possibility of a wig during a court hearing a couple of weeks ago, Gonzalez acknowledged he was right. She also acknowledged she’d never told prosecutors about the wig, either.

For more details on the trial, read At the Courthouse. Meanwhile, a search of the New York Times website for “Brisenia Flores” yields zero results; CNN.com last covered the story in June of 2009.