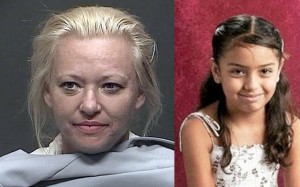 A jury in Tucson has sentenced a border activist to death in the 2009 murder of a young girl and her father. The woman, Shawna Forde, 43, was convicted of first-degree murder and other charges in the May 2009 home invasion in Arivaca, a desert community about 10 miles north of Mexico. Raul Flores, 29, and his daughter, Brisenia, 9, were killed in the robbery. Prosecutors said Ms. Forde and accomplices considered Mr. Flores a drug smuggler and wanted to use his drug proceeds for a paramilitary organization to seal off the border to immigrants.

Previous Article
Harvard's Albert Einstein Institute: Non-Violence According to the CIA
Next Article
Censorship: Nuremberg Film Suppressed by the OSS & War Dept. to Premiere in Toronto