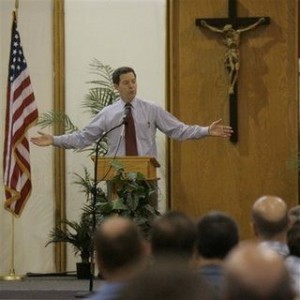 Brownback's silence on religion speaks volumes. The U.S. senator from Kansas has flatly refused to address the issue of his conversion a year ago to the Roman Catholic faith and his association with Opus Dei, an ultra-conservative offshoot of the church. ...

Brownback was lured to Catholicism by Opus Dei guru Father C. John McCloskey III. And since then, nearly every story about Opus Dei, whether written by the Catholic press or mainstream media, links Brownback and McCloskey.

Brownback, of course, won't comment on why he keeps getting mentioned with Opus Dei ... 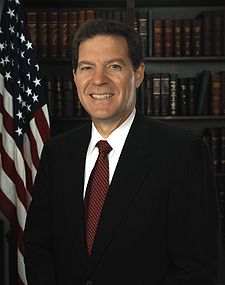 Since 2004, Senator Sam Brownback has been supporting a major change in the constitutional structure of the United States. Brownback was a co-sponsor of the Constitution Restoration Act of 2004 later reintroduced in 2005. The Constitution Restoration Act seeks to limit the power of the Federal Judiciary to review any question that involves religious liberty. The pernicious act even goes so far as to suggest impeachment of any judge who "hears" a case involving religious liberty. The act would leave to the State courts the control over freedom of religion, thus limiting minority and non-Christian religions from participating in the United States society.

Sam Brownback is a Catholic and was received into the Catholic Church by Father C. John McCloskey, an Opus Dei priest and although Sam is not a member of Opus Dei, he still aligns himself with their extreme conservative philosophies, especially their anti-democracy philosophies. Brownback has lived in the C Street House ((http://en.wikipedia.org/wiki/Sam_Brownback)) which has been linked to the Dominionist conspiracy by its owners, the Youth with a Mission and the leader of that group, Loren Cunningham. http://www.huffingtonpost.com/2009/07/21/jeff-sharlet-reveals-dist_n_241857.html..

The Constitution Restoration Act has been called a Dominionist document by Frederick Clarkson of the Public Eye Magazine in 2005. http://www.publiceye.org/magazine/v19n3/clarkson_dominionism.html.

There are three significant acts that Sam as taken to support the Dominionist agenda: one, he sponsored the Constitution Restoration Act; two, he continues to have strong relations with Lou Engle and Loren Cunningham, significant figures within the Dominionist heresy; and three, he ran for President in 2008 and now governor of Kansas in 2010. The logical next step is that Sam will run for President again in 2012 with the strong support of the religious right. Is Sam the designated person to take control of the "Mountain" in the Seven Mountain Mandate called "Government"?

Tired of waiting for the Second Coming to enforce Christ's rule on Earth? Fortunately, so is your Congress and they know how to "bring it on."

Just when you thought the corporatist/Christian Coalition had milked the 9/11 "surprise" for all it was worth in powers, profits and votes, we regret to report that you may have to think again. Just in case you've briefly fallen behind on your rightwing mailing lists, you might have missed the March 3rd filing of Senate bill S. 520 and House version is H.R. 1070, AKA the "Constitution Restoration Act" (CRA).

In the worshipful words of the Conservative Caucus, this historic legislation will "RESTORE OUR CONSTITUTION!", mainly by barring ANY federal court or judge from ever again reviewing "any matter to the extent that relief is sought against an entity of Federal, State, or local government, or against an officer or agent of Federal, State, or local government (whether or not acting in official or personal capacity), concerning that entity's, officer's, or agent's acknowledgment of God as the sovereign source of law, liberty, or government." [Emphasis demanded - see full text here.]

In other words, the bill ensures that God's divine word (and our infallible leaders' interpretation thereof) will hereafter trump all our pathetic democratic notions about freedom, law and rights -- and our courts can't say a thing. This, of course, will take "In God We Trust" to an entirely new level, because soon He (and His personally anointed political elite) will be all the legal recourse we have left.

This is not a joke, a test, or a fit of libertarian paranoia. The CRA already has 28 sponsors in the House and Senate, and a March 20 call to lead sponsor Sen. Richard Shelby's office assures us that "we have the votes for passage." This is a highly credible projection as Bill Moyers observes in his 3/24/05 "Welcome to Doomsday" piece in the New York Review of Books: "The corporate, political, and religious right's hammerlock... extends to the US Congress. Nearly half of its members before the election-231 legislators in all (more since the election)-are backed by the religious right... Forty-five senators and 186 members of the 108th Congress earned 80 to 100 percent approval ratings from the most influential Christian Right advocacy groups."

This stunning bill and the movement behind it deserve immediate crash study on at least 3 different fronts.

1. Its hostile divorce of American jurisprudence from our hard-won secular history and international norms. To again quote the Conservative Caucus: "This important bill will restrict the jurisdiction of the U.S. Supreme Court and all lower federal courts to that permitted by the U.S. Constitution, including on the subject of the acknowledgement of God (as in the Roy Moore 10 Commandments issue); and it also restricts federal courts from recognizing the laws of foreign countries and international law [e.g., against torture, global warming, unjust wars, etc. - ed.] as the supreme law of our land."

Re the last point, envision some doddering judges who still revere our Declaration of Independence's "decent respect to the opinions of mankind," and suppose they invoke in their rulings some international precepts from the UN's Universal Declaration of Human Rights, the Covenant on the Elimination of All Forms of Discrimination against Women or, God forbid, the Geneva Conventions. Well, under the CRA that would all be clearly illegal and, thank God, that's the last we'd ever hear from them.

2. The political implications of replacing "we the people" with a Christian deity as the "sovereign source" of all our laws.

Imagine hyper-zealous officers or "entities" of the Federal, State, or local government (like a governor, legislature or school board) that mandate Christian prayers, rituals and/or statuary in public buildings under their control. Were this to happen, some local Jews, Muslims and/or Buddhists might be moved to hire a lawyer and legally object. But if the CRA passes, their objection would be beyond any court's jurisdiction and that's the last we'd ever hear of that. It in fact demands "impeachment, conviction, and removal of judges" who dare to even hear a case that challenges its "Last Days" morphing of Christian church and state. (Just how our new Sovereign Source of Government's advocacy of public executions for adultery, gay-ness, contraception and blasphemy will fit into our current corrections system still remains to be seen.)

3 The incessant mainstream media blackout on the bill's existence and import.

The potential impact of the Constitution Restoration Act on American life, law and politics is so radical and vast that you would expect a boiling national debate. Yet just as with the crimes and questions of 9/11, everyone in the media seems terrifically busy looking the other way. If you want yet another dramatic metric of US journalistic dysfunction, try Googling "Constitution Restoration Act" in their News category and see what you get. Today, three weeks after the bill was filed, I find a grand total of three throwaway mentions in Alabama's Shelby County Reporter, the Decatur Daily, and the Massachusetts Daily Collegian. ("Terry Schiavo" in contrast will net you over a thousand news hits, and "Michael Jackson" just passed 36,000 with a bullet.)

If the Alabama paper interest seems a little odd or sponsor Shelby's name a bit familiar, you should recall that this old boy AL senator was high among those same wonderful folks who kicked off the 9/11 cover-up. As his Senate bio proudly relates:

Got that? First he "oversees" intelligence for six years before 9/11, then "diligently investigates" its bizarre "failures" for two years more, and finally finds--in a no-fault judgment--it was all due to "deep institutional defects" and "systemic miscommunication" that he'd apparently never noticed or heard about before. Having so brilliantly defended the country before 9/11 and the official story since, some seem to find it comforting that he's now busy defending our court-harassed Constitution with a legally bulletproofed God. Some, alas, do not -- feel comforted, that is, either by Shelby's blurry oversight or fundamentalist agenda, not to mention the Orwellian performance of our autistic corporate press.

In the meantime, however, before the CRA takes force and reduces legal education to a Bible study course, what say we undertake a little Constitutional defense of our own? To get up to speed on the current Christian right agenda, Moyers' "Welcome to Doomsday", Katherine Yurica's "The Despoiling of America" and John "The 9/11 Truth Candidate" Buchanan's "Fixing America" are excellent places to start.

None of these analyses offer a silver bullet or paint a pretty picture, but as students of 9/11 now know, spreading the courage to face the truth is really the only hope we've got.