Kansas' 4th District Rep. Mike Pompeo is one of 13 incoming Republican members of Congress who are packing registered lobbyists to accompany them to Washington.

Pompeo announced earlier this month that he's chosen Koch Industries heavyweight Mark Chenoweth to serve as his chief of staff. Chenoweth previously worked as a lawyer on the lobbying team for the Kansas oil conglomerate, which has been described as the "Standard Oil of our time." It's owned by zillionaire brothers Charles and David Koch of Wichita. The Koch brothers are behind the right-wing think tank Americans for Prosperity.

Mark Chenoweth is a lobbyist's lobbyist.

​ThinkProgress.org previously described Pompeo as "essentially a subsidiary of the Koch brothers' business empire," noting that Pompeo's first reaction to the BP oil disaster in the Gulf of Mexico was that he "fervently" hoped the government wouldn't "overreact." 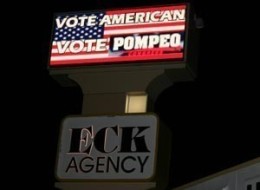 In fact, the only political involvement that Pompeo could boast prior to his election was his service as a trustee on the Flint Hills Center for Public Policy (motto: "Advocating for free markets and the protection of personal liberty") whose board is stuffed with Koch think-tank-educated economists and activists.

Pompeo founded his subcontracting firm, Thayer Aerospace, with investments from Koch Venture Capital, then sold the firm in 2006. Koch's PAC was the source of a huge chunk of Pompeo's campaign funding. The Kochtopus already receives a dizzying amount of federal contracts. With Pompeo in office, it's safe to say that those contracts aren't going anywhere any time soon.