S. California: Rep. Bilbray Speaks on his Board Membership of Hate Group Underwritten by the Pioneer Fund

Congressman Questioned about Affiliation with FAIR 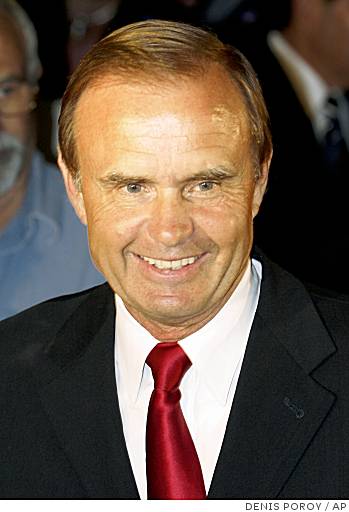 SOLANA BEACH, Calif. — Local Rep. Brian Bilbray is counting on his tough stand on illegal immigration to earn him another term in Congress, but some of his detractors said he will do anything to win, including working with an alleged hate group to push his anti-immigration agenda.

The 10News I-Team learned Bilbray is on the Federation for American Immigration Reform’s (FAIR) board of advisors, spent three years as a lobbyist for the group where he earned $300,000 and has accepted campaign contributions from FAIR political action committees.

FAIR is classified as a hate group by the Southern Poverty Law Center, one of the United States’ leading civil rights groups. “Are you proud to be a part of FAIR?” I-Team reporter Mitch Blacher asked.

“I think FAIR was really leading edge, may not agree with everything,” answered Bilbray.

“This is a group that defames Latinos, has an incredible animus toward Latinos and whose leader, frankly is a white nationalist,” said Southern Poverty Law Center Research director Heidi Beirich.

Last year, the Southern Poverty Law Center identified 932 hate groups in the United States, and FAIR was one of them.

“Every time we turn over a rock it seems like we turn over something even worse,” Beirich said. “All the more reason why people like Bilbray … it would be nice if they would distance themselves from this kind of stuff.”

The views of FAIR founder John Tanton have put the organization into questionable light. Tanton, who is still on FAIR’s board of directors, has written statements like: “I’ve come to the point of view that for European-American society and culture to persist requires a European-American majority, and a clear one at that.”

“It seems like he’s talking about a white majority. This is the guy who founded FAIR. Does that create an issue for your involvement?” asked Blacher.

“Well, I think Tanton kind of reflects the point of view of a lot of people who were involved in the pro-birth control movement at the time,” Bilbray responded.

The pro-birth control movement is the belief that certain people should have children and others should not.

The I-Team also asked Bilbray about campaign contributions from FAIR supporters in 2006. The I-Team learned $10,000 of support came at the time the group’s Western region representative, Californian Joseph Turner, expressed opinions like this one he blogged in 2005: ‘I’ll be damned if I am going to sit back and watch my state turn into a third world cesspool.’ “Doesn’t it seem like this guy might be a little bit fringe?” Blacher asked.

“And he might be,” Bilbray said. “But the fact is that you get a lot of people that really get fed up every time you talk about lets make the law apply to everyone equally, somebody calls you a racist because of it.”

The I-Team also looked at where FAIR got its money. The Pioneer fund, a group that funds scientific research to “improve the character of the American people” by promoting the practice of eugenics or selective breeding has given $1.3 million to FAIR.

“Wouldn’t know anything about that,” Bilbray said. “There’s a lot of that kind of discussion going on but I never heard it.”

Through out the interview, Bilbray stood by his statements and his involvement with FAIR.

“Perhaps the reason that Bilbray is willing to be on the board of FAIR is because he shares some of these bigoted ideas,” Beirich said.