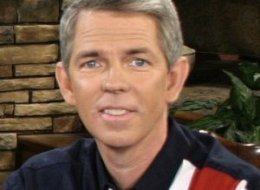 Accidentally addressing a neo-Nazi hate group can happen to even the best of folks. But doing it twice?

Barton has twice addressed white-supremacist organization with ties to neo-Nazis, but both times has done so accidentally, he says. He has also been a leader in the movement to rewrite American history to remove Civil Rights leaders and knock down the wall separating church from state, arguing that it is a myth. He led the recent effort to rewrite Texas textbooks to describe America as a Christian nation.

Barton addressed the Rocky Mountain Bible Retreat of Pastor Pete Peters’ Scriptures for America and Kingdom Covenant College in Grants Pass, Oregon, both associated with neo-Nazi ideology. “At the time we were contacted by Pete Peters, we had absolutely no idea that he was ‘part of the Nazi movement,'” Barton’s assistant wrote later in explaining the speaking gigs. Barton didn’t return a HuffPost message left with his assistant and Websters campiagn didn’t return calls, either.

“The Religious Right’s leading practitioner of this type of historical revisionism is David Barton, who runs an outfit called WallBuilders out of Aledo, Texas,” Rob Boston of Americans United for Separation of Church and State has written. “Barton makes a lucrative living traveling the right wing’s lecture circuit where he offers up a cut-and-paste version of U.S. history liberally sprinkled with gross distortions and, in some cases, outright factual errors. Crowds of fundamentalist Christians from coast to coast can’t get enough of it.”

Rev. Randolph Bracy, president of the Orange County NAACP, a nonpartisan civil rights organization, said that when he saw Webster advertising Barton’s endorsement, it raised questions. “What does that say about your candidacy? You’ve got to know better in this day and time. Whether he repudiates it or not, it’s his call,” he told HuffPost. “You’ve got to know what kind of person he is. If you don’t know, just Google the name and it’ll tell you.”

Bracy condemned Barton as a Holocaust-denier, an anti-Semite and someone who has called for the death penalty for gay and lesbian people, among other “very crude” positions. “Barton has a long history, a long history of being related to the worst fringes of our society,” he said. “Recently, our national office voted to repudiate portions of the Tea Party movement for their racist fringes.”

Barton’s religious revisionism has continued since his addresses to the neo-Nazi groups. Earlier this year, he pushed for César Chávez and Thurgood Marshall to be removed from Texas textbooks. Barton argued that civil rights leaders can’t be given credit for civil rights victories because only “majorities” – white people – have the ultimate power to change the law, according to the Washington Monthly. “Only majorities can expand political rights in America’s constitutional society,” he testified.

Barton-endorsed Webster appeared on Fox & Friends following his victory, indicating that Fox News intends to nationalize the Florida race. Grayson’s campaign is well-funded by a passionate national base of progressive small donors.