" ... Eugenics were incorporated into Nazi policy during the 1930s. The 1933 Law for the Prevention of Hereditarily Diseased Offspring was based on the model law [Harry] Laughlin had employed with such great success in the United States. ... "

Harry H. Laughlin, eugenicist and advocate of forced sterilization in the U.S., born today in 1880

Jokes are sometimes made that people should have to obtain a license before they’re allowed to become parents, but Harry Hamilton Laughlin took that concept a little too far. A prominent eugenicist who influenced the Nazis’ racial hygiene policies, Laughlin was born today (March 11) in 1880 in Oskaloosa, Iowa.

In essence, eugenics is the science of improving a population by encouraging reproduction by those members with desirable characteristics and eliminating those members with undesirable characteristics. This elimination is generally accomplished by forced sterilization of those with undesirable traits, rendering them unable to reproduce, and, in more extreme cases, through flat-out extermination.

Laughlin took an interest in eugenics after working as a high school teacher and principal, and served as the director of the Eugenics Record Office from its opening in 1910 until its closure in 1939. His notable contemporaries in eugenics, both in terms of research and support, include Charles Davenport, a leader of the American eugenics movement and founder of the Eugenics Record Office, President Theodore Roosevelt, and Margaret Sanger, who founded Planned Parenthood.

Laughlin’s zeal for the field made him instrumental in passing forced sterlization laws in many U.S. states. He advocated for the compulsory sterilization of those with developmental disabilities, physical deformities, mental illness, alcoholism, and epilepsy and those who were blind, deaf, impoverished, or criminally inclined. He also conducted research on the connections between the aforementioned undesirable characteristics and race.

To encourage the acceptance of his policies, Laughlin wrote a model eugenics law, carefully worded so as to be Constitutional, on which states could base their own legislation. About two-thirds of states instituted forced sterilization laws, though they were followed more strictly in some states than in others. These laws continued to be invoked into the 1970s in the case of some mentally ill patients.

Eugenics were incorporated into Nazi policy during the 1930s. The 1933 Law for the Prevention of Hereditarily Diseased Offspring was based on the model law Laughlin had employed with such great success in the United States. For his contributions to the “science of racial hygiene,” Laughlin was awarded an honorary degree from the University of Heidelberg in 1936.

Now that eugenics had become associated with the fascist Nazi regime (who sterilized 350,000 individuals during the first year of the 1933 law), it quickly fell out of favor throughout the free world. The research performed by the Eugenics Record Office was deemed no longer scientifically valid and the office shut down due to lack of funds in 1939.

In spite of the change in public opinion regarding the validity of eugenics, Laughlin does not appear to have altered his own views, even going so far as to practice eugenics in his personal life. After Laughlin was diagnosed with epilsepsy, one of his much-advocated conditions for sterilization, he and his wife refrained from having children. He passed away in 1943. 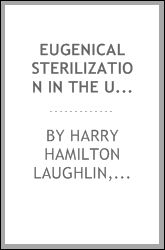 Harry Hamilton Laughlin, a son of George Hamilton and Deborah Jane Laughlin, was born at Oskaloosa, Iowa, on March 11, 1880, and spent his youth in Kirksville. His father was a minister of the Christian Church in Kirksville and professor of Romance Languages at the First District Normal School (now Truman State University).

In February 1907, Laughlin's interest in breeding experiments led him to write Charles Benedict Davenport, the director of the Station for Experimental Evolution at Cold Spring Harbor, New York. Dr. Davenport was one of the first scientists to introduce the concepts of Mendelian genetics into the United States. After establishing the Eugenics Record Office, underwritten by Mary (Mrs. E. H.) Harriman, Davenport asked Laughlin to be the superintendent. In October 1910, Laughlin and his wife Pansy moved to Cold Spring Harbor, New York where they stayed for the next 29 years.

Dr. Laughlin received a D.Sc. from Princeton in 1917 for a thesis on cytology and an honorary degree from the University of Heidelberg in Germany in 1936.

He was superintendent in charge of the Eugenics Record Office of the Department of Genetics of the Carnegie Institute of Washington, D. C., from its origin in 1910 until 1921 and director from 1921 until 1940. Dr Laughlin served as the eugenics expert for the Committee on Immigration and Naturalization, U. S. House of Representatives from 1921 to 1931; the Eugenics Associate to the Municipal Court at Chicago, 1921 to 1930; the U. S. immigration agent to Europe for the Department of Labor from 1923 to 1924; and was a member of the permanent Immigration Commission of the International Labor Office of the League of Nations in 1925.

Dr. Laughlin was a prolific writer, publishing numerous articles and books on eugenics, eugenical sterilization, immigration, genetics, and various phases of inheritance including racing capacity in thoroughbred horses. It is his work on eugenical sterilization and immigration restriction for which he is best known. Laughlin's Eugenical Sterilization in the United States established him as an expert on the topic. His model sterilization laws were used by many of the more than 30 states that passed sterilization laws. Germany's 1933 sterilization laws were also modeled after Laughlin's. Laughlin's immigration studies, which seemed to support the idea that recent immigrants from Southern and Eastern Europe had a higher percentage of "socially inadequate" persons than other immigrants, led to the highly restrictive immigration quota system of 1924 which favored immigrants from Northern Europe. As is evident in the Laughlin Collection, Dr. Laughlin also devoted considerable time and effort developing his ideas for a common world government.

Dr. Laughlin was married to Pansy Bowen of Kirksville on Sept. 13, 1902; they had no children. After his retirement from the Eugenics Record Office they returned to Kirksville in December 1939. Dr. Laughlin died January 26, 1943, and was buried near his father and mother in Highland Park Cemetery in Kirksville.