Crist Calls Out DeSantis for Silence on Planned 'Nazi' Protest 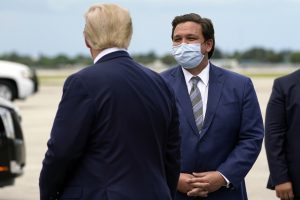 In a Monday tweet, Crist accused DeSantis' apparent unwillingness to denounce a January Nazi rally in Orlando as directly correlated with a planned protest of an upcoming drag queen story hour in the city.

The threat of violence later prompted the hosts to cancel the event, after a Florida antifascist group reported the likely presence of extremist groups like the National Socialist Movement, the Patriot Front, the Goyim Defense League and the Proud Boys.

Crist, on Monday, suggested it was part of a trend. "Last time Nazis came to Orlando they waved flags with DeSantis's name," he wrote. "He did not condemn them and now they are back targeting LGBTQ+ Floridians."

This week's incident is yet another event in a series of protests across the state featuring far-right extremists, with Democrats seeking to tie their opponents to them.

In January, DeSantis faced national media scrutiny after delaying to condemn a small group of Nazi protesters in Florida's Orange County—a weekslong media scandal exacerbated by an incident in which his press secretary deleted social media posts suggesting they were organized by Democrats.

DeSantis did eventually condemn the protests, but only after he was asked about it in a news conference. According to media reports at the time, the governor called the neo-Nazi demonstrators "jackasses" before noting they committed the crime of demonstrating on an overpass and would be held accountable.

He then pivoted by accusing Democrats of trying to distract from President Joe Biden's record, before saying he did not believe it was necessary to elevate the profiles of the estimated 20 neo-Nazi protesters who were spotted at the event.=

"They try to play games to try to politicize, why would they do that?" DeSantis asked at the time. "Why would they want to elevate a half-dozen malcontents and try to make this an issue for political gain?"

It would not be the last time his statements would be used against him.

In July, the state's Democratic commissioner of agriculture and consumer services, Nikki Fried, wrote a letter to DeSantis formally requesting that he condemn Nazi demonstrations that took place in Tampa following sightings of "DeSantis Country" flags among swastikas and other Nazi imagery. The organizers of the event, Turning Point USA, quickly condemned the protesters following the incident while DeSantis, Fried said, did not.

"Disturbingly, this is not the first time I have asked you to condemn Nazi demonstrations in our state," she wrote. "In January, you refused to denounce a Nazi gathering in Orlando, claiming it was an attempt to 'smear me as if I had something to do with it.' As one of your harshest critics, I do not believe you are involved directly with Nazi demonstrations, however, your continued failure to speak out—especially when your name, image, and likeness is being co-opted by Nazis—is puzzling from a governor who never fails to speak his mind."

Race and the Election: Rural Virginians, Clinging to Guns and Religion, Confront their own Racist Stupidity