THE 1974 MURDER OF MRS. ALBERTA KING IS NOT AS WIDELY KNOWN AS THE MURDER OF HER LATE CIVIL RIGHTS LEADER SON, WHICH TOOK PLACE JUST SIX YEARS BEFORE IN 1968. 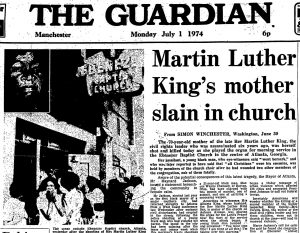 Dr. Martin Luther King, Jr.’s assassination in April 1968 by James Earl Ray is considered by many to be one of the most tragic events in American history.

The killing of Dr. King  sparked protests in more than 100 cities around the country, followed by a period of national mourning, according to history.com.

But did you know that his mother, Mrs. Alberta King, was also murdered just six years later as she sat in church? Her death is an often-forgotten chapter in the history of the civil rights struggle.

The tragic events of that day have recently garnered much more attention following the premiere of the Showtime series The First Lady’ in April.

The series delves into the personal and political lives of three of America’s first ladies: Michelle Obama, Eleanor Roosevelt and Betty Ford. In episode one, Ford attends the funeral of Alberta King.

On June 30, 1974, a young Black man walked into Atlanta’s Ebenezer Baptist Church and shot the mother of the late civil rights leader as she played the organ for morning services.

According to The Guardian, Mrs. King, whose husband, the Rev. Martin Luther King, Sr., was pastor of the church on Auburn Avenue, was playing the “Lord’s Prayer” on the organ near the start of the service when the attack began.

The young man, later identified as Marcus Wayne Chenault of Ohio, reportedly jumped up and screamed, “You must stop this! I am tired of all this! I’m taking over this morning.” According to Atlanta magazine, he then bolted to the pulpit and pulled out a gun.

He fired his weapon and hit Mrs. King, church deacon Edward Boykin and congregation member Jimmie Mitchell. Chenault was wrestled to the ground by bystanders while attempting to reload, all the while constantly yelling about “the war.”

“He was delirious. He appeared to be in a fever. He said over and over, ‘The war did this to me. It’s the war,'” Mrs. King’s grandson, Derek, said.

King and Boykin were rushed to Grady Memorial hospital, where they were pronounced dead. Mrs. King was 70 years old. The attack on her and other church members is said to have occurred less than 100 yards from where Dr. King, who died at the age of 39, was buried.

According to the New York Times, Chenault told the police that his mission was to kill Rev. King, Sr., but he shot Mrs. King because she was close to him.

He claimed that “all Christians are my enemies” and that Black pastors were a threat to Black people. The Guardian  that Chenault was charged with two counts of murder, one of assault and one of carrying a concealed weapon.

Chenault claimed insanity during his trial, but he was found guilty and sentenced to death. His sentence was later commuted to life in prison due partly to the wishes of the King family’s surviving members, who were opposed to capital punishment.

On August 3, 1995, Chenault suffered a stroke, and was taken to a hospital. He never regained consciousness, and died sixteen days later at 44.