We've been covering the pending release of the Senate Intelligence Committee's CIA torture report, which is currently undergoing a fight over what should or should not be redacted. We also covered the NY Times report about how former CIA boss George Tenet (who helped mentor current CIA boss John Brennan) is both implicated by the report ... and has been leading the campaign to discredit the report.

It appears that he's not the only former CIA boss tapped to do so. Former CIA (and NSA) director Michael Hayden has kicked off what can only, charitably, be described as a smear campaign against the report and any of its supporters. The piece, published in the Washington Times, tries to paint the whole thing as being a "Democrat" plot to discredit the good and righteous CIA-supporting Republicans.

Frankly, the idea that any of this is a partisan battle is just silly. Lots of things in DC are partisan, but there's been little indication that the CIA report is driven in any way by partisan interests. After all, the CIA's current director, Brennan, was appointed by a Democratic President. In fact, in the past, Brennan has actually lashed out at Republicans for playing "political football" over national security issues. Of course, now that it's happening in his favor...

Hayden goes on to push a blatant smear on Retired Major General Antonio Taguba, who recently wrote an op-ed for the NY Times asking President Obama to stop hiding the report and to release it. Of course, Hayden doesn't actually link to Taguba's piece. Because he doesn't want you to actually read it. He just wants to smear Taguba, who has some experience in exposing coverups and bad behavior. He headed the military's investigation into the Abu Ghraib prison. And his statement is powerful:

Even though a bipartisan majority of the committee voted to declassify the report, there is a concerted effort to discredit it by depicting it as partisan and unfair. The report’s detractors include the C.I.A. itself: The agency’s rebuttal will be released alongside the report’s key sections. While the C.I.A. is under no obligation to stay silent in the face of criticism, it seems that between its apparently excessive redactions and its spying on the committee’s computers, the agency is determined to resist oversight.

Yet I know from experience that oversight will help the C.I.A. — as it helped the United States military. Ten years ago, I was directed by Lt. Gen. Ricardo S. Sanchez, the senior officer in Iraq, to investigate allegations of detainee abuse at the Abu Ghraib prison in Baghdad. My report’s findings, which prompted a Senate Armed Services Committee hearing, documented a systemic problem: military personnel had perpetrated “numerous incidents of sadistic, blatant, and wanton criminal abuses.”

The findings, along with what became infamous images of abuse, caused a stir and led to prosecutions. The inquiry shed light on our country’s trip to the dark side, in which the United States government engaged in an assault on American ideals, broke the law and in so doing strengthened our enemies. 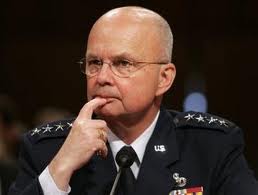 The heart of Hayden's smear campaign is that Taguba couldn't possibly know what's actually in the report, because it's not out yet. He admits that some details of the report have been leaked to the press, but insists that no one knows if these are accurate. Of course, he also admits that he, himself, was given a copy of the report to review (in unredacted form, even), and yet he doesn't even attempt to counter what was said in the leaks. Hmm.

Hayden also pulls the "law and order" card, in claiming that the CIA couldn't possibly have done wrong because the "CIA’s program was authorized by the highest levels of the U.S. government, declared lawful on four occasions by the Department of Justice, monitored by an Inspector General, and briefed to the leadership of Congress." Except... that's not quite what the leaks from the report have said. It talks about how the CIA regularly misled Congress about the program, including what techniques they were using and how effective the torture program was. Besides, the whole "it's okay because someone said it was legal" excuse is extremely weak.

Mr. President, the stakes are too high to allow the intelligence community to circle the wagons and obscure the truth about torture: that it is both wrong and wrong-headed, an immoral and illegal act that makes the country less safe. People familiar with the report, as well as news reports, say that the committee has concluded that torture was more brutal and common than Americans were led to believe and that it failed as an intelligence-producing tactic. The committee also reportedly found that the CIA misled the administration and Congress about the nature and extent of the torture.

We understand why CIA officials will find these findings embarrassing. But potential embarrassment is not a valid reason to try to deny Americans a full understanding of what their government did in their name. The military took its lumps when the Senate Armed Service Committee released its report on detainee abuse within its ranks and emerged as a stronger institution as a result. President Obama should ensure that the CIA does the same.

This report offers the best opportunity yet for us as a nation to come to terms with what our government did in our name. The debate is not historical or academic.

Again, rather than addressing any of the issues, or responding to their claims, Hayden goes back to the same tired line that the report is a "Democrat" report, and that since these generals haven't seen it (while he has), they should not comment on it.

Hayden then goes on to brush off the now admitted spying on the Senate Intelligence Committee by the CIA, claiming that it was a "clumsy investigation" and not a "constitutional crisis":

Supporters of the SSCI report are likening CIA opposition to the SSCI Democrats’ conclusions as an attack on oversight itself. CIA’s clumsy investigation into how Senate staffers acquired some documents feeds this story line, but forcefully saying the report is badly flawed isn’t a constitutional crisis — it’s a disagreement over facts.

But the "constitutional crisis" that people were discussing was not a "disagreement over facts" it was over the CIA, a part of the executive branch, spying on its overseers in the legislative branch. That is a constitutional issue. You'd think Hayden would be aware of the basic separation of powers, but perhaps not. Furthermore, it's not the "SSCI Democrats' conclusions." The vote to declassify the report was not Intelligence Committee Democrats vs. Republicans but a bipartisan11 to 3 vote.

It seems that defenders of the CIA are getting fairly desperate in smearing anyone credible (including three highly respected former high ranking military officers) speaking out on why the CIA's shameful torture program shouldn't be hidden behind black ink.