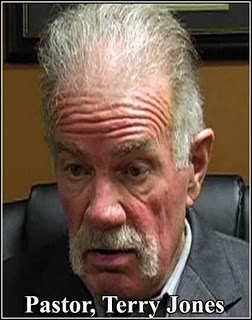 A Gainesville, Florida church named the Dove World Outreach Center has drawn international attention to itself with its planned book burning of the Quran. The church urges people to send them copies of the book for burning at a bonfire event to be held on church property this coming September 11. The date marks the ninth anniversary of the 2001 September 11 attacks on the United States. The church's motive is an act "in remembrance of the fallen victims of 9/11 and to stand against the evil of Islam," according to its page wall on Facebook. The church is receiving condemnation as the book of Quran, often spelled Koran in Western usage, is the central religious text of Islam.

A group of religious leaders in Indonesia, represented by Catholic, Confucian, Hindu, Muslim and Protestant persuasions, publicly condemned the church leaders, Pastors Terry and Sylvia Jones. Describing the plan as an "anarchist action," they seek to meet with the United States ambassador in hopes of putting an end to an action that "puts other religions in contempt" of the event.

A local news outlet in Gainesville, The Independent Florida Alligator, published an August 3 letter to the editor written by New York resident Kirsten Tedesco. The author, who identifies as Christian, wrote of Dove World church, "Your message of hate and bigotry is another twisting of [a Christian] faith based on love and compassion for all people."

Two days later, the Alligator news staff published an editorial pointing out that city mayor, Craig Lowe, "hasn’t wasted any time coming out in protest of [the church's] plans." Noting the press coverage this has already generated, the editorial urged that the event be ignored. Describing the church group as people who have gone beyond being a "fringe" element, the editorial closed by suggesting, "… but we do have high hopes that a lack of attention will make them move to a place that feeds the fire – hopefully somewhere far away from Gainesville."

In a comment to the editorial, made by a reader going by the screen name Abaddon, the user's post wryly observes, "I suppose I get no points for pointing out the irony in publishing an article in a newspaper about how something 'deserves no attention', but there it is anyway."

The church, which is non-denominational, is promoting the event on its official website and other online media. A church pastor, Wayne Sapp, has posted two videos on YouTube titled, International Burn a Koran Day. The first was posted two weeks ago. Part 2 of the video came a week later. The first video has been labeled by the YouTube community as, "... being potentially offensive or inappropriate." In the Part 2 video, Sapp says the church has received "several hundred emails" and "some comments [in the YouTube community]" to which the second video is in response. In doing so, Sapp ridicules all but one of the persons he responds to by the deliberate and incorrect pronunciation of the screen names of those to whom the rebuttal is directed.

On Facebook, so far the church has at current count nearly 3,600 People [who] Like This. On that forum, the church invites other religious groups to join in standing, "against the evil of Islam. Islam is of the devil!"

Islam is of the devil is the title of a book written by senior pastor of the church, Terry Jones. "Islam and Sharia law was responsible for 9/11, we will burn Qurans because we think it's time for Christians, for churches, for politicians to stand up and say no; Islam and Sharia law is not welcome in the U.S." he said. The book title is being marketed as a slogan that appears on hats, shirts and coffee mugs that can be purchased at a dot.com website with an address bearing the book's title.

The National Association of Evangelicals in the United States has already issued a statement urging the church to cancel the event as this would offend and hurt the international Muslim community.