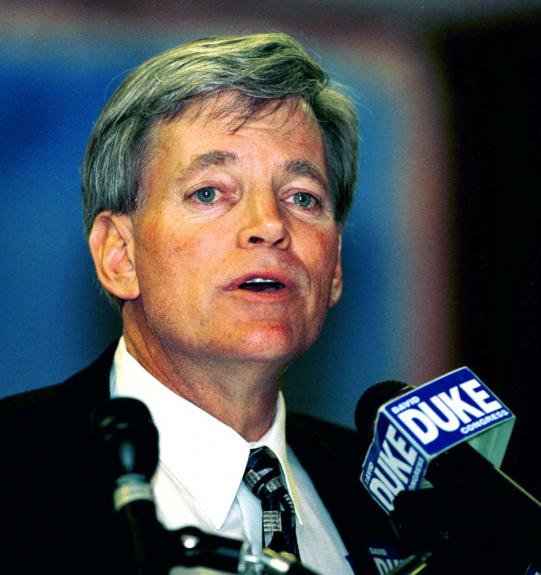 And you thought David Duke hated anyone who wasn’t white. Well, a video released yesterday by South Florida-based radical-Muslim group American Muslim Association of North America puts the lie to that belief.

Well, it did for a while, anyway: The clip was taken down last night.

On the video, “Dr.” David Duke says some not-nice stuff about Jewish folks — we knew for a fact he hated them, but aren’t they kind of white? — so confusing — and he shakes the hand of Iranian prez Mahmoud Ahmadinejad. And it’s not like he’s not that white.

So what gives? Helping explain the intricacies of whom to hate and when are the friendly folks at the Islamic Center of Boca Raton: “The Jews are people of treachery and betrayal; it is not possible to trust them at all.”

The video referred to shows the handshake at around 5:00, when Duke says, “The lying, controlled media repeats a million times that Ahmadinejad threatens to wipe Israel off the map. Well, I was 20 feet from him at an international conference in Tehran where he was so quoted, and his actual words in his own language, Farsi, were that he believed Israel …”

David Duke can speak Farsi? Who knew?  It’s rhetoric like this, says Joe Kaufman of local activist group Americans Against Hate, that got the head of AMANA, Sofian Abdelaziz Zakkout, booted off the U.S. Commission on Civil Rights.