“In the Service of Old Comrades”: Some Nazi Recruits of the CIA’s Gehlen Org - The Constantine Report
0 SHARES

American Terrorism » “In the Service of Old Comrades”: Some Nazi Recruits of the CIA’s Gehlen Org

By Klaus Eichner and Gotthold Schramm

(Google Translation from the German, edited by Alex Constantine) 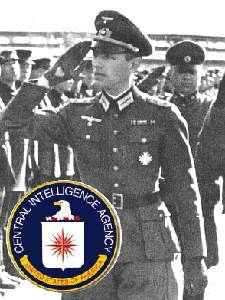 After his return from the United States in 1946, the former Nazi General Reinhard Gehlen was to build up a German intelligence service. The resulting "Gehlen Organization" (ORG Gehlen) became the forerunner of the later Federal Intelligence Service (BND).

From there, Gehlen turned his attention to the creation of bases abroad. His submerged network of Nazi war criminals was a duplication of his experience in the Nazi secret services. This was his human reservoir.

In the early years, the reservoir was tapped by American intelligence agencies, particularly the Army's Counter Intelligence Corps (CIC). But in personnel questions, he held the upper hand, the operatve principle being "old comrades in the service of old comrades." The U.S. agencies could only weild their power and their dollars.

Austria, an Residentur was active in 1948. Eine führende Rolle spielte hier Josef Adolf Urban played a leading role here, Lieutenant Colonel Urban was the leader of Nazi Security Service (SD) in Vienna and a Balkan expert in Office VI of the Reich Security Main Office (RSHA). He had most recently served as chief of the Fascist SD-control center in Budapest.

After the war, Urban worked as a paid news agent for the CIC and other Western intelligence agencies, also as head of security of the werewolf neo-fascist group under Dr. Theodor Soucek in Graz.  Despite his deep darl spirit, Urban was officially recruited in 1956 as an employee in the Federal Intelligence Service, and he served well into the 70s in an executive position under the cover name UHL in Pullach.

The first illegal agent the Gehlen ORG in Italy, under the leadership of John Gehlen, Reinhard's brother, was (working name) GIOVANNI, the leading source of intelligence in the Vatican in emigre circles.

One of the leaders for the work of the ORG in North Africa and the Middle East was an SS colonel in the SD and liaison officer between Schellenberg and Gehlen, Franz Wimmer-Lamquet. In 1944, he had led the Sonderkommando Wimmer, "which consisted of mercenaries and natives, and was used for acts of terrorism in North Africa."

In the Middle East, Colonel Alois Brunner, a former SS storm colonel, was an intelligence expert for the for the Gehlen ORG.   Brunner was one of the leading collaborators of Adolf Eichmann, participated in the extermination of Jews in Vienna (1939-1941), Berlin (1942/43), Greece (1943) and France (1943-44) and Slovakia (1944 to February 1945). According to the Simon Wiesenthal Center, Brunner was responsible for the deaths of 128 500 people. In France, he was sentenced to death in absentia.

Brunner lived in Germany until 1954 under a false name. With a passport in the name of Dr. Georg Fischer, he traveled on behalf of the ORG to Syria. He was an active spy until 1962 under the code name Ali Mohammed, and took orders from Gehlen and the CIA in Cairo, then returned to Damascus.  There he held numerous contacts with German journalists, tourists and diplomats, although the FRG submitted an extradition request to the Syrian government. On March 2, 2001, a French court sentenced the mass murderer again for crimes against humanity in absentia  to life imprisonment.

Since the early 60's, the BND operated in apartheid South Africa. General Horst Mellenthin, one of Gehlen's closest aides, had early on entrusted his brother, Friedrich Wilhelm Mellenthin, with the management of intelligence operations in the region. In 1960, Mellenthin launched Trek Airways in Südafrika.2

Argentina  had one of the largest overseas expat colonies. They recruited heavily from the Nazis who fled Europe at the end of World War II, and lived under the patronag of Juan Peron (President 1945-1955). The enclave offered a nearly  inexhaustible pool of informants and contact people for the ORG and the Gehlen BND. Since the early 50s,  both took advantage of the fixed colony in Buenos Aires.

There was also a major intelligence connection in Adolf Galland, one of the most decorated fighter pilots of Nazi Germany. After the war, Galland fled via the so-called rat line to Argentina, where he made arms deals on behalf of the Federal Republic in the 1960s, gratis the ORG and Gehlen BND.

SS colonel Dr. Rudolf Oebsger-Roeder was assigned to Indonesia. He had commanded a task force of the SS, which committed a massacre of Polish civilians in Bydgoszcz. In 1941, he led the SD Section of Gdansk. Oebsger-Roeder was the founder and first director of the Zeppelin Company.  This company selected hundreds of Soviet prisoners of war. They were indoctrinated and prepared for action in the Soviet hinterland. In October 1944, he was an SS colonel instructor in the RSHA school of espionage. After the war he was briefly detained, but ived for several years in Munich, worked as an instructor in the Gehlen ORG, then relocated to Indonesia, where he acted as advisor and biographer of the Indonesian dictator Suharto under the auspices of the Federal Intelligence Service. Despite several investigations, Oebsger-Röder treavelled freely to visit the FRG. He died in Munich, unmolested, in June 1992.

A Mass Murderer in the BND

Beginning of 2011,  according to Der Spiegel, "Klaus Barbie, the 'Butcher of Lyon," worked for the BND  in 1966 for "some months." He carried the code name "Eagle" and was received by the BND under the registration number V-43118. After all, Barbie was characterized as a "staunch enemy of communism with nationalistic-German sentiment."

We want to help the public see a little more behind the scenes.

Barbie imprisoned hundreds of Jews and German refugees. After several promotions, he was dispatched to the Eastern Front against the Soviet resistance movement.

In 1942 he appointed to the RSHA, Gestapo chief of Lyons, one of the centers of the French Resistance. Assessment of the work of Barbie in the region includes: detention of more than 14,000 fighters of the Resistance, participation in more than 4,300 killings and the deportation of 7591 Jews to the gas chambers at Auschwitz. According to eyewitness reports, Barbie personally took part in a number of tortures and murders.

At war's end, Barbie escaped from France and fled to the U.S. occupation zone, surrendered to American authorities. The first "gift" he gave U.S. intelligence agents concerned the French Communist Party in the Lyon region.

The purpose of using active Nazis for intelligence purposes, writes Phillip Knighthley, was that they supposedly provided intelligence on intact organizations behind the Iron Curtain, or, like Barbie, could be there to help find intelligence agents who were in hiding, and they also could be recruited. 3

A document in CIC files dated19th February 1949 has the subject line: "Klaus Merk, Klaus Barbie." It contains the following statement. "The new action plan will require urgently obtaining all the new sources, the discovery of so many old Gestapo and SS informants as possible, especially those that served under the Nazi system in the infiltration of the Communist Party." 4

The French government demanded the extradition of Barbie, who was listed in the American CROWCASS register of war criminals, and in the internal CIA list of  wanted war criminals.5

Although he was on the payroll of the CIA was (with a salary of at least $ 1,700 per month) 6, the State Department repeatedly denied any knowledge of his existence.

In 1950, CIC authorities feared that  the French might apply diplomatic pressure, so Barbie was given a "new" passport in the name Klaus Altmann of the International Red Cross. The CIA smuggled him via the "rat line" to Bolivia, where Barbie continued his activities as an agent for the CIA and BND.

According to incomplete records in the Federal archives, the BND gave Barbie the code name "Eagle" in early 1966, BND registration number V-4311. He allegedly received his first monthly payment of $500 in May 1966. Thereafter, regular payments and performance bonuses were deposited in his account at the Chartered Bank of London in San Francisco.7 After all, Barbie was so important to the BND that  in December 1966 he travelled to Germany for training.8 ... CONTINUED IN ROUGH TRANSLATION

[…] Josef Adolf Urban played a leading role here, Lieutenant Colonel Urban was the leader of Nazi Security Service (SD) in Vienna & a Balkan expert in Office VI of the Reich Security Main Office (RSHA). He had most recently served as chief of the Fascist SD control center in Budapest. [Read More] […]