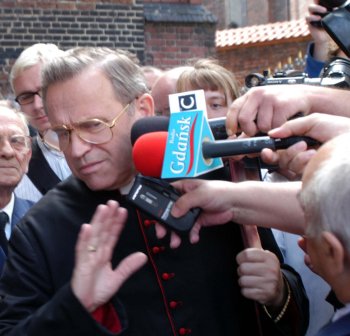 (JTA) -- The Rev. Henryk Jankowski, a Polish priest who was a key figure in the anti-Communist Solidarity movement but later was disciplined by the Catholic Church for anti-Semitism, has died.

Jankowski died Monday in Gdansk, according to the Polish city's mayor, Pawel Adamowicz. He was 73.

A flamboyant and controversial figure, Jankowski won fame in 1980 by leading striking workers in prayer at Gdansk's shipyard and became known as the "Solidarity chaplain."

After the fall of communism, however, he became notorious for anti-Semitic statements and preaching. On one occasion Jankowski decorated his St. Bridget Church at Easter with the slogan, "The Jews killed Jesus and the prophets and persecuted us as well."

Polish church leaders eventually banned him from preaching and dismissed him as the St. Bridget rector.