Pravda: "Romney and Obama are the Puppets of Filippo Martinetti and Fritz Kraemer" - The Constantine Report
0 SHARES

American Terrorism » Pravda: "Romney and Obama are the Puppets of Filippo Martinetti and Fritz Kraemer" 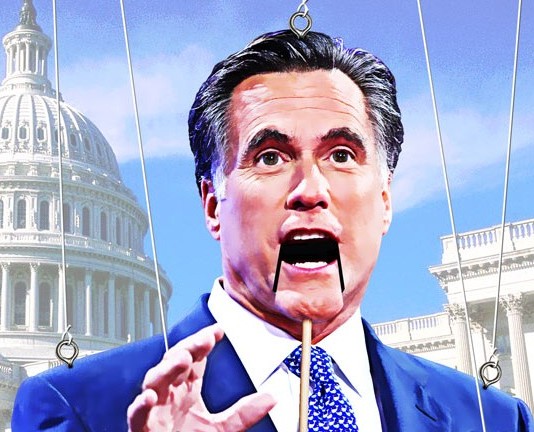 "Marinetti [and Benito Mussolini] understood the masses as material to be formed by men of action. A bond was established between futurists and fascists..."

US Republican Presidential candidate Mitt Romney's speech at the Virginia Military Academy in early October was an embarrassment to the nation. For those who seriously study the life and career of General George C. Marshall (or teach about the man and his times to young/old Americans) it was appalling to the senses to hear Marshall's name invoked by Romney just as it would be by any of today's American  civilian and military leaders.

But there is a far more serious issue facing the United States than the appropriation by the cultish Romney of, perhaps, America's greatest military commander, statesman, teacher, politician, negotiator and public servant.

The nearly hyper-fascist, war making state of political and cultural/economic affairs in the United States today makes it possible for American leaders (and handlers) from business and government to steal and distort history, and deliberately wrench current events in order to advance ideological agenda's for the benefit of cultish ideology. Neo-conservative liberalism with barely disguisable fascist tendencies/programs hides at the core of both the Republican's and Democrat's party platforms. The platforms' wording camouflages the reality taking place outside of the documents: austerity, war, fear and torture are the predominant themes of the day.

There is a frightening description of the ideology/politics of both Obama and Romney and their respective camps/supporters. It reflects the times and it comes from Filippo Martinetti's Futurist Movement that emerged in late 19th and early 20th Century in Italy. The Futurist Movement is analyzed and described with eloquent excellence in Stephen Eric Bronner's Modernism at the Barricades, (2012, Columbia Press).

Martinetti would have thrilled at the United States' freneticism. He would marvel at the use of remotely piloted Unmanned Aerial Vehicles (Drones) to destroy enemies of the US State. Martinetti would have unbounded excitement for Rods from God, the use of spaced-based platforms to--once activated--nearly instantly destroy a target anywhere on Earth. The speed with which information flows over the World Wide Web; the rapid distortion and elimination of history and memory; America's perpetual wars that cleanse the world; the disconnected and relativist cultural stovepipes that characterize American ethics and society; and the subtle, yet brutal, destruction of American cities, workers and government social programs (austerity) would have been trumpeted by Martinetti in his flamboyant showman-like manner.

There seems little doubt that if Martinetti lived today, he would be a major player in the political process of the US as a neoconservative liberal.  He'd likely support Romney but given Obama's warring record, he might go for the incumbent president.

Bronner describes Martinetti's Futurist platform thus.  "Speed, Motion and incessant activity for the sake of activity-the constituents of the multiplied man-are also the constituents of the fascist style and outlook. Introducing the virgorous and the dynamic necessarily calls for conditions in which, as Marinetti writes, 'the sick and the weak will be crushed, crumbled and pulverized by the vehement wheels of intense civilization. The green beards of provincial back alleys will be shaved clean by the cruel razors of speed.'"

Bronner continues. "Progress has nothing human about it: the dignity of times past is a thing of the past. The sublime not only escapes articulation but obliterates all ethical concepts and humanitarian norms. Existence itself is propelled into a situation where there is no past, even the best past, along with a self-negating horizon. Duration comes to mean as little for individual as for a machine. Speed and annihilation become ends in themselves. The individual, again, is worth no more than a light bulb. Reification reasserts itself as it becomes clearer in Futurist Painting, Technical Manifesto (1910) so that "the suffering of a man is the same interest to us as the suffering of an electric lamp which, with spasmodic starts, shrieks out the most heartrending expressions of color...Marinetti...believed that war might serve as an antidote to boredom and he became an advocate of war as the world's only hygiene...'

Len Colodny's--with Tom Shactman--The Forty Years War: The Rise and Fall of the Neocons from Nixon to Obama (2009, Harper Collins) is an extraordinary work that should be used in educational coursework from the senior level in US high schools through the college years. American voters and foreign observers of American politics should seek out the text.

Colodny has written an exceptionally documented and scintillating yarn of American politics dating from the World War II years to the first days of President Obama's administration. The marquee events, names and organizations common in today's political/historical analyses of those years and neocon movement and its successes and failures are all featured prominently in the book: Kissinger, Nixon, Haig, Reagan, Clinton, Bush (first and second), Obama, Rumsfeld, Cheney, Carter, Bin Laden, Paul Wolfowitz, Richard Perle, Watergate, Iran-Contra, 911, Bob Woodward, the Cold War, the Project for a New American Century, the American Conservative Union and so on.

But the real power of the book comes from Colodny's digging beneath the standard American historical narrative of the panoply of events, issues and personalities of 1945-2009 to adroitly reveal the many stories of personal power grabs; political infighting between the White House/CIA, State and Defense Departments and Congress; ideological constitutional warfare; and, arguably, petty criminal activity bordering on treason. All of this is sourced with 432 "notes" to the text and a fine bibliography.

What is fascinating and unsettling is that all of this political and ideological brinkmanship and internal warfare took place even while the US leadership was faced with life and death matters like the Cold War, Vietnam, 911, both Iraqi invasions and an assortment of domestic maladies.

Given the dangerous state of the world at the time, The Forty Years War leaves one wondering how the United States, led by the many egomaniacs and ideologues in power, managed to get the United States to the position of "sole superpower" without self-destructing.

Unsettling, after reading Colodny's book, comes the knowledge that the same ideas, people processes, and struggles are in play as the US seeks war with Iran, NATO intervention in Syria and strained relations with China and Russia even as its domestic health deteriorates.

Among the many revelations in The Forty Years War there are a couple that standout.

A little known Pentagon analyst named Fritz Kraemer and his many protégé's (Kissinger, Rumsfeld, Haig, for example) would arguably become the godfather of the neoconservative movement. His theory of "provocative weakness" would be repeated time and again over the years. "Although the public had no awareness of Fritz Kraemer, he had influenced generals, service secretaries, secretaries of defense, and secretaries of state since the 1940's. It was Kramer who coined the term "provocative weakness." That concept, which reflected his militaristic approach to foreign policy, along with other Kraemer tenets such as his rejection of diplomacy and his emphasis on morality as a guide for policy made Kraemer the godfather of the George W. Bush administrations ways of relating the United States to the rest of the world more so than Leo Strauss..." writes Colodny.

Colodny notes that "the ideas they [neocons] shared [with Kraemer] ranged from Kramer's basal distrust of international organizations such as the United Nations, to his preference to elite rule, to his belief in the United States to spread democracy, to his championship of Christianity." That's not too far removed from Marinetti's view.

The Moorer-Radford spy operation documented in Colodny's opus documents how Nixon's attempts to negotiate arms reductions with the USSR were stymied by the most senior military personnel in the Joint Chiefs of Staff office with the help of a spy operation created by Admiral Tom Moorer. "He ordered the military liaison office, operating in the White House, to spy on Kissinger, the National Security Council and the president. The principal thief would be a young clerk, Yeoman Charles Radford...Though the scheme itself lasted for only a year and a half, its results-and the reverberations of its exposure-continued through the end of Nixon's presidency and beyond."

On Moorer's command, ...The military staffers who worked at the liaison office at the White House, but reported to him at the Pentagon, stole a substantial number of sensitive documents from Kissinger and the NSC and therefore from the president...Moorer, who had sworn when accepting his office as chairman to observe the Espionage Act, was the main receiver of the stolen goods. The intermediary was the newly elevated Rear Admiral Rem Robinson, chief of the military liaison office and Radford did the stealing."

There are other gems in The Forty Years War.

Bob Woodward, the famed Washington Post writer, pops up repeatedly. His relationship with senior US military and intelligence personnel-most prominently Al Haig-is explored in detail. The claim by Bob Woodward that Mark Felt was "Deep Throat" (over the "gaps" in some of the Watergate tapes) is questioned by Colodny. The FBI was apparently not aware of the matter and Felt had been out of the FBI for six months.

Watergate is painted in different colors (Felt without exonerating any of the players. Other "currents" as Colodny points out were flowing adding to Nixon's Watergate woes. Given the animosity Nixon and Kissinger had created within the military and intelligence communities, there were good reasons for wanting him out of the White House (arms limitations with the USSR, opening to China, social/environmental programs, loss of presidential power). The currents combined into a flood that drowned the Nixon presidency.

Filippo Martinetti and Fritz Kraemer's doctrines can be seen in every aspect of political and cultural life in the United States today. Elitism; the "gratuitous act" of reality entertainment; the loophole society; the unaccountability and an unwillingness to accept some measure of canon and standard; the atomization of American society; the condescension towards "the other"; and, as David Bowie alluded to in the song Young American, the denial of history in favor of an unmoored existence--"Do you remember your President Nixon...Do you remember the bills you have to pay or even yesterday.."

John Stanton is a Virginia based writer specializing in national security matters. Reach him at cioran123@yahoo.com. The Moorer-Radford Spy Operation will be the subject of a forthcoming piece.