Only One Person Showed Up for a Rick Santorum Rally 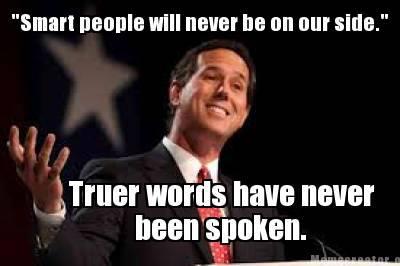 As his food arrived, about three more people showed up.

Those in attendance were the local Republican Party Chair Peggy Toft and Pastor Glen Meyers. Santorum decided to discuss gay marriage with them.

“This is where the left is saying, ‘Here is what your belief system should be, and anyone who does not toe the line, you’re a hater, you’re a bigot, you’re intolerant and you will not be tolerated,” Santorum said.

Santorum tried to play the low turnout as part of his plan.

“People don’t understand, One guy in there said, ‘I’ll speak for you at the caucus,’” said Santorum. “That’s maybe eight votes that you wouldn’t otherwise get. Eight votes can make a big difference, as I know.”