by Kenneth Roth
www.hrw.org
MAY 19, 2009
Published in the Far Eastern Economic Review 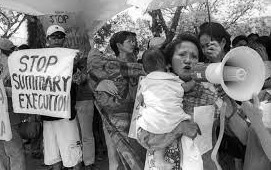 When does closing one’s eyes to mass murder become encouragement? The Philippines present that question head-on. An electoral democracy with a vibrant press and competing political parties, the country has moved beyond most aspects of the Marcos dictatorship. But at least one legacy of that dark time remains—a dangerous willingness to use execution as a clandestine tool of government.

Until recently, the victims tended to be leftist party members and activists as well as sympathetic journalists and clergy. International condemnation led the government to curtail these extrajudicial killings, although the failure to prosecute the perpetrators remains worrying. Today, attention is turning to new categories of victims, mostly poor and marginalized, such as alleged petty criminals, drug dealers, gang members and street children.

The death squad capital of the Philippines is Davao City, the nation’s third largest city, located on the southern island of Mindanao. The city’s long-time mayor, Rodrigo Duterte, is famous for projecting an image of being tough on crime. Yet despite his hands-on approach to governance, Mr. Duterte claims ignorance about the so-called Davao Death Squad, denying that it even exists.

A recent Human Rights Watch investigation made a mockery of his denials. Nine insiders described the machinery of death. Current and former Davao police officers and local officials select the targets and equip local thugs with handguns or knives. Riding a motorcycle without license plates, the death squad members approach their victim in broad daylight, often in busy markets, and with no attempt to hide their identities, kill him in cold blood. The killers then nonchalantly drive off, confident that the police, who had been warned of the murder and thus conveniently absented themselves, will take their time to return, and will then perform at best a perfunctory investigation. Witnesses are too terrified to identify the death squad members for fear of becoming their next victim.

More than 800 Davao City residents have fallen victim to the Davao Death Squad over the last decade, and the trend is accelerating; 33 were killed this past January alone. Moreover, death squads have now sprung up elsewhere in Mindanao and beyond.

Mr. Duterte’s response to this epidemic of murder in his city has been cagey. While denying any connection to death squads, he announced this past February that if you’re a criminal, “you are a legitimate target of assassination.” No translator was needed to understand his drift. President Arroyo, who once appointed Mr. Duterte her adviser on peace and order, only recently began to confront the ugly reality of the death squads.

Mr. Duterte’s denials would be one thing if there were serious questions about the existence of the Davao Death Squad. The lack of evidence that Mr. Duterte is personally directing the killing is beside the point. Rather, his denial of the undeniable signals to death squad members and those directing them that he is willing to cover up for their murderous activities. The death squad members are not stupid; they can read between the lines. Mr. Duterte’s blinking at reality suggests a nod and a wink.

Sadly, given the continuing inadequacy of the Philippine justice system, many Filipinos seem to accept the need for such brutality in approaching the nation’s crime problem. But it’s not only wrong to summarily take someone’s life; it’s also extraordinarily dangerous.

Contrary to expectations, the Davao Death Squad has not reduced crime. In the decade since it began operating, crime in Davao City has mushroomed ten times faster than the population. That’s not surprising, since contempt for the law breeds further lawlessness.

Moreover, once the police start playing God, the temptation becomes enormous for them to expand the class of victims. Today, the city’s supposed low-life; tomorrow, political or personal enemies. As Latin America of the 1980s showed, the business of death squads can consume a country, creating an environment where no one is safe.

So it is time for the Philippine government to move beyond unconvincing denials. President Arroyo took a first step this month by ordering the police to “get to the bottom” of vigilante killings. Her powerful executive secretary, Eduardo Ermita, added that “criminality is a social malaise that can never be remedied by such executions,” which he called “illegal” and “immoral.” The test now will be whether the Philippine government takes these strong statements to heart and launches vigorous investigations and prosecutions of those behind this murderous plague.

Kenneth Roth is the executive director of Human Rights Watch.