From the National Council of Churches in the Philippines
13 July 2007
http://www.mindanews.com/index.php?option=com_content&task=view&id=2842&Itemid=63 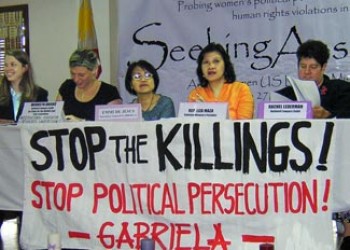 The Human Security Act (HSA) is based on the notion that “the State must be held above all else. The State must wield absolute power, using everything to control the territory and population of a country.” It must protect itself at all costs even at the cost of its own citizens. Thus, anything and anyone, that threatens national interests in the eyes of the present dispensation is deemed as a foe, a terrorist, “an enemy of the state."

With the HSA, the State has set itself up as the absolute power that determines what course people’s lives will take by putting forward a very vague definition of terrorism. By so doing, the State has usurped the functions that rightfully belong to God. By playing God, the State commits the highest form of sacrilege.

The Human Security Act will surely result in many human rights violations as its provisions curtail basic freedoms that run counter to our Constitution; it basically presumes guilt unless proven innocent; it purportedly protects the interests of the state, and hence the people, from terrorists but it actually legitimizes terrorism – state terrorism.

It demands full obedience and subservience from its constituents. We must recall why Jesus was crucified, why heroes and heroines died and why many human rights defenders today are being silenced. That is because they would not toe the political line of the powers and principalities. And because they refuse to be subservient, they are labeled as “subversives.”

The State must rid its territory of subversives or terrorists.

The Human Security Act is a travesty against the sacred tenet of freedom that God bestowed on people. Thus, to accept the Human Security Act is to defy the will of God. The Human Security Act must be reviewed by our lawmakers in order for the law to really safeguard the security of human beings. But because HSA is contextually infirm and is prone to abuse by repressive government authorities, the National Council of Churches in the Philippines (NCCP) calls for the repeal of RA 9372.