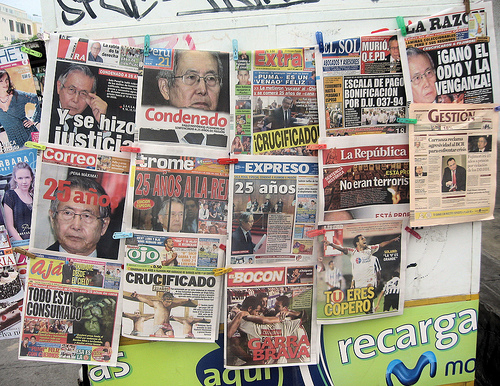 A decade after the end of Peru's 1980-2000 counterinsurgency war was officially declared, the army broke its silence, to give its own version of events. The report, "In Honor of the Truth," based on officers' field dispatches, contradicts the findings of the official Truth and Reconciliation Commission (CVR) that nearly 70,000, mainly indigenous peasants were killed or forcibly disappeared in the war against the Shining Path guerillas.

Gen. Otto Guibovich, who was army chief until December and ordered the report in 2009, told IPS: "To write the history of a conflict, anyone knows it is necessary to consult the war dispatches, because that's where the history is recorded."

The report, presented in November, claims that army atrocities were the work of individuals and did not form part of military doctrine. It emphasizes that counterinsurgency manuals do not recommend wiping out populations, but winning over hearts and minds. "The human rights violations that regrettably occurred during the war were not a systematic practice, and were neither ordered nor orchestrated by the Peruvian army command, but were the result of absolutely individual decisions and actions," the report states.

Attorney Karim Ninaquispe of the Runamasinchiqpaq human rights association (ADEHR), representing massacre survivors at the highlands village of Accomarca, asserts that the lack of a paper trail does not mean military impunity. He told IPS: "The army does not set down the statements of Telmo Hurtado, who personally led the massacre in Accomarca, which implicate the military high command and prove that [Hurtado's] actions were not an 'excess' of war, as they are trying to depict."

"In Honor of the Truth" also maintains that the Army Intelligence Service (SIE) "death squad" known as the Colina Group was never officially part of the army. The Colina Group carried out the notorious Barrios Altos and La Cantuta massacres in 1991 and 1992, in which a total of 25 civilians were killed. Former president Alberto Fujimori is serving a 25-year sentence in connection with the killings. "No detachment, group, unit, department or division under that name exists or existed in the army's records," says the report reads. (IPS, Dec. 28)

In October, the 11th US Circuit Court of Appeals cleared the way for the extradition of retired army officer Telmo Hurtado, who fled to Miami in 2002 to escape trial for the Aug. 14, 1985 massacre of 69 people in the Andean village of Accomarca. He was arrested in Miami in April 2007 by U.S. Immigration and Customs Enforcement (ICE) agents for lying on his visa application, claiming that he had no criminal record. In March 2008, a federal judge in Miami ordered him to pay $37 million in reparations to two survivors of Accomarca, and recommended his extradition to face criminal charges in Lima. The 11th Circuit turned down Hurtado's habeas corpus application, ruling that Peru's request for extradition of Hurtado is valid. "I want to look him in the eye and hear him tell the whole truth," Emiliano Quispe, head of the Association of Relatives of the Victims of Political Violence in Accomarca, told IPS. (IPS, Nov. 5)