” … Female political prisoners were kept alive during their pregnancies, only to be summarily killed after giving birth, often dropped alive and naked into the sea from military aircraft. … “ 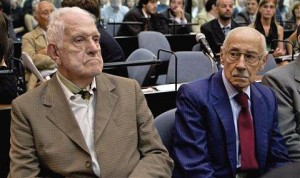 Two of Argentina’s former dictators have appeared in court in Buenos Aires to face charges in connection with the kidnapping of hundreds of babies, seized from their mothers during military rule in the 1970s and 80s.

The trial of Jorge Videla and Reynaldo Bignone began on Monday, with about 80 people expected to testify about a systematic plan by which babies were taken from political opponents and others held in secret facilities.

Videla headed Argentina’s military leadership from 1976 to 1981, while Bignone ruled from 1982-1983. They are on trial with six other defendants.

Outside the court steps, protesters from the rights group HIJOS, “children”, waved flags and chanted for justice on behalf of the detained and disappeared.

“We were the regime’s war spoils,” said 33-year-old Leonardo Fossati, who will be testifying at the trial.

While the children were adopted by families friendly to the military leadership, their parents were rarely heard from again.

Female political prisoners were kept alive during their pregnancies, only to be summarily killed after giving birth, often dropped alive and naked into the sea from military aircraft.

About 500 babies are thought to have been stolen, according to the Grandmothers of the Plaza de Mayo, an organisation which has so far been able to track down and identify 102 of them.

“We have waited 30 years to get justice and see them in jail,” said Chela Fontana, whose daughter Liliana, was kidnapped by a commando when she was two months pregnant.

Videla, who is 83, had been sentenced to prison for life during a 1985 trial against military leaders for crimes against humanity, but he received amnesty five years later from Carlos Menem, a former president.

The amnesties were annulled during the 2003-2007 presidency of Nestor Kirchner, the late former Argentinian leader, paving the way for these latest trials.

The trial is expected to take up to a year.