Caveat: Note that Scripps' puffery gives token mention of criticism of Opus Dei's Archbishop Gomez, without peering  too deeply into his "conservative" politics and connections. "Conservatism" is offered  here unquestioningly as a corrective influence on the corrupt Catholic Church - a welcome "change," echoing the mantra of the Obama campaign - as if "conservatives," including Ratzinger, weren't the source of the Vatican's current problems in the first place. This opinion-page spam is a sterling example of syndicated media content, but it offers precious insights on the Vatican's mismanagement and propaganda machine. It also manages to be very depressing and funny at the same time ... - AC 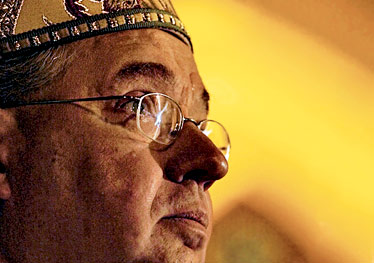 While theologians and scholars believe the key appointment of a Latino archbishop to the largest and arguably the most influential Catholic archdiocese in the world signals the return to a more conservative direction in the Roman Catholic faith, followers said they welcome change during a time of increasing global criticism of church leadership.

In the midst of growing international criticism over clerical sexual abuse cases, Pope Benedict XVI last week named San Antonio Archbishop Jose Gomez to succeed Cardinal Roger Mahony as the leader of the Archdiocese of Los Angeles after he retires in February on his 75th birthday.

The move to replace Mahony with the 58-year old Latino archbishop laid the groundwork of a revival toward a more traditional view of authority that predates the Second Vatican Council, scholars said.

"Globally, the Roman Catholic Church is going towards a much more conservative direction," said Dyron Daughrity, assistant professor of religion at Pepperdine University. "The church is steering itself through a strategic leadership to a much more conservative stance. One thing is certain, Jose Gomez is going to change the ethos of the largest Catholic Archdiocese in America."

Gomez, 58, who has ties to the Opus Dei order favored by the Vatican, has received both praise and criticism for his work and views.

While he's a proponent of immigration rights, liberal Catholics have criticized him for his more conservative views. Gomez once criticized a Catholic university in San Antonio for allowing Hillary Rodham Clinton speak on the campus because of her views on abortion.

Once Mahony retires, Gomez will oversee the 5 million Catholics in the Archdiocese of Los Angeles, which includes Ventura County.

While some critics have already labeled Gomez a "conservative," Mahony said such generalizations are unfair.

"Some may conclude that since Archbishop Gomez was ordained a priest of Opus Dei he must be 'conservative,'" Mahony said in a statement. "In fact, these labels of 'conservative' and 'liberal' are really unhelpful in the life of the church. We are all called to a deep relationship with Jesus Christ, and I can attest that both of us share a common commitment to Christ and to the church, and that both of us are interested in promoting the teachings of the church fully as well as bringing the words and example of Christ to today's society and world."

"The church has undergone incredible changes during the Second Vatican Council, which was a modernizing reform that most traditional Catholics said should not have been ordered," Blewett said. "We have a very disintegrated culture at the church as of right now, and I think Pope Benedict is an agent for change who will work closely with the new archbishop."

Daughrity said critics who have pegged the new archbishop as staunch conservative paint an incomplete picture of a complex man.

In the past, Gomez has ordained Catholic priests formerly in the Episcopal church and married. As a Mexican immigrant, Gomez also has been a strong advocate for immigration rights for all people, Daughrity said.

"He is certainly not a liberal, but he is also not a cookie-cutter conservative either," Daughrity said. "One man can significantly steer a large group of people. In all likelihood, he will revive the priesthood and will bring a much more traditional view of authority."

Some non-Catholics following the new developments in the Vatican and locally said people of all faiths are looking for direction from their religious leaders more than ever.

"Change is always good if it is taken with a sense of renewal," said the Rev. Gary Kyriacou of St. Demetrios Greek Orthodox Church in Camarillo. "Change is not good just for the sake of change. Right now, I would think the Los Angeles archdiocese would need a conservative leader with what they are going through. I think we all need to take ourselves to a more strict level and live the faith by its doctrine."

At Santa Clara Church in Oxnard, the Rev. Mariusz Bezek, a visitor, spoke to the Friday morning service attendees about the importance of change, transformation in the church and hope for all Christians.

Mary Solis, 72, said she was pleased to hear that Gomez has more traditional leanings. The idea of a Latino archbishop who could bring about change and revive the archdiocese excited the 72-year old Oxnard resident.

Despite all of the controversy the church has undergone, Solis said, the future relies not only on strong leadership but also on the continued faith of its followers.

"We have to be united and pray more so that our faith will bring us out of all of this," Solis said. "We just have to keep our faith, pray and be united and stand behind our pope. It will take time, but this will only bring us closer."

(Marjorie Hernandez is a reporter for the Ventura County Star in California.)

the best quote describing the American dream/nightmare: “US officials have for decades ignored practical reason and have deliberately adopted an essentially diabolical ideology which promises a sort of heaven on earth but always delivers the opposite”. Remember Hitler promising the german workers paradise? Right. . .

Nope, just a completely bonkers stinking pile of soul murdering crap, that’s all. . . Pray for him, and watch what happens. Oscar Romero was a conservative priest until he became personally aware of just how many people were being murdered in his parish. Then he opened up the churches and let all of them in under the protection of Mother Church. Then the rich had him terminated and the hitter is still running from his associates down there in south America.