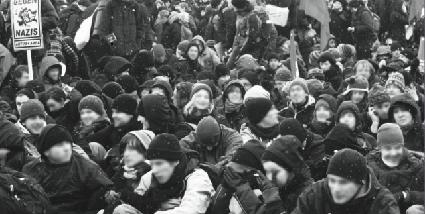 A neo-Nazi gang, calling itself “National-Socialist Underground” (NSU), has murdered at least 9 Turkish and Greek immigrants over the last 13 years. The murder of a police officer in 2007 is also thought to be linked to the group. Only following a bank robbery were police close to arresting members of the NSU and two suspects are reported to have committed suicide. A third suspect was arrested.

The media tried to present them as bank robbers. But left activists and left media were first to expose this group as a Nazi-terror organisation.

In addition to some of the migrants being shot, others were murdered by bomb attacks. At that time the police refused to connect the facts that the victims were all migrants and the series of murders were politically motivated. The most common rumour was that the Turkish Mafia was responsible for the murders. This was a pure mockery for the victims and the bereaved, especially now it has been revealed that neo-Nazis where responsible.

During investigations in which police found the murder weapons, they also found a video in which the terrorists admit to and brag about the attacks. Moreover, the video also contained evidence pointing to connections with, and deep involvement from, the ‘Federal office for the protection of the constitution’ (the federal states’ domestic intelligence agencies) with the group.

Left activists and left media stressed the political background of the terrorist group, which pressured the capitalist media and government to react to the obvious facts. New evidence is being revealed every day. Police have at least 20 suspects who they believed aided the NSU.

The results of the investigation expose the fact that the state institutions were working hand in glove with the neo-fascists. Right-wing and neo-fascist organisations are financed by the state. Different national and federal states’ domestic intelligence services paid “whistle-blowers” thousands of Euros for information. Examples were not exposed in the media of how this money was used to build far right structures.The terrorist NSU emerged from the far right “Thuringian Homeland Security” (THS). The leader of the THS was unmasked as an undercover agent in 2001 and boasted about using money from the national domestic intelligence agency, received over seven years, to build the THS.

It is not clear yet how much information the different German security forces had on the NSU, but new information is leaked almost every day.While the intelligence agencies supported the far right, left wing activists were criminalised and had their homes and workplaces spied on, and their emails and phone calls tapped. They were stopped on their way to demonstrations or blockades and were sued many times by the same agencies. It was revealed that all mobile-phone data was surveyed at a big antifacist-protest in Dresden in 2011.

The state recently set up a “hotline” to “help people leave extremist left-wing groups”. This was not only directed to “violent protesters” but also members of “socialist organisations”. This is modelled on a similar system for youth involved in far right groups.

German Chancellor Angela Merkel is already struggling with a population whose distrust toward her government is growing. The junior coalition partner of Merkel’s CDU (Christian Democratic Union), the FDP (Liberal Democratic Party), would not even be re-elected into the parliament if there were elections now. Under the pressure of the recently publicised facts on the state and far right groups, the governments at a national and a federal-state level are trying to present themselves as fighting neo-fascism. Given all the links between the state and the far right, this is pure hypocrisy.

The discrimination against migrants by the state, by employers and landlords opens space for neo-fascist ideology. There have been racist and nationalist campaigns in the German media and from the establishment, for example, against Greek people in relation to the Eurozone crisis or against Muslims in general.

Social decline - especially in Eastern Germany where more than one third of industrial jobs have been lost since the end of Stalinism - is polarising society. Because the left has not filled the vacuum by offering a socialist alternative, the neo-fascists have exploited the situation. The development of fascist groups, intimidating and attacking migrants, left-wing activists and trade-unionists, has been accepted to a certain extent by the capitalist state.

The bosses and their politicians’ main concern was the harm this could do to their foreign image and businesses. As the neo-Nazis got too strong some limited actions against them were taken.

The government now plans a central database for right-wing activists to connect the police and the intelligence services. This is a hypocritical attempt to cut their losses. But it is also a step toward more repression, which is likely to be used against left activists in the future.

Another way the capitalist establishment has tried to take advantage of the situation is to adjust the discussion towards “the struggle against extremism generally”. They argue that left and right-wing ideologies are the same, that both are against humanity and democracy.Socialists and anti-fascists have to point out the differences and make clear who’s against democracy and attacking workers’ and migrants rights and lives. The right-wing massacre in Norway this summer or the 180 murdered anti-fascists and migrants during the last 20 years in Germany show explicitly the danger of neo-fascists.

They have to be stopped. The support of the state for neo-Nazi organisations has to end immediately. The SAV (CWI in Germany) demand abolition of all intelligence services, including the federal offices “for the protection of the constitution” involved in the recent events. All information about the investigation has to be made public and intelligence gathering about neo-Nazi groups has to be organised by an independent commission, representing working people and the wider public - not the state.