from the journalism! dept

When 60 Minutes did its hack PR job for the NSA a few weeks ago, lots of people called out the fact that the reporter who handled the segment, John Miller, wasn't just a former intelligence official working for the Office of the Director of National Intelligence (which oversees the NSA), but that he was widely rumored to have worked out a deal for a new job for the NYPD, heading up "counterterrorism." Even though there were multiple reports at the time, including one that claimed it was a "99.44% done deal," when asked about it, Miller lied. He told a reporter, "you know as much about this as I do."

That was clearly Miller lying -- something that Miller has had an issue with in the past -- as the "rumor" is now confirmed and Miller has accepted his job doing "counterterrorism" for the NYPD. And while some might say that doing counterterrorism for a city police force is different than working for national intelligence, that's only because you're not familiar with the NYPD, which has set up something of a shadow NSA/CIA to do all sorts of activities not normally associated with a police force. 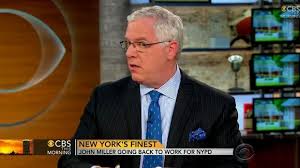 And, of course, since the press was clearly familiar with Miller's expected role, it raises serious questions about why 60 Minutes allowed the puff piece to move forward with a seriously conflicted "journalist." While Miller has lashed out at critics, rather than respond to a single point raised, the brand that comes out worst in all this is clearly CBS and 60 Minutes -- which basically let an intelligence official do an entire propaganda piece on the NSA. 60 Minutes used to be about hard journalism. Now, apparently, they think it's "journalism" to shill for the surveillance state.