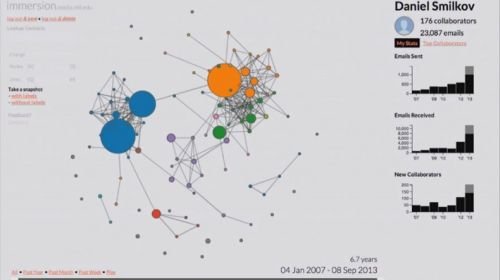 You’ve probably heard politicians or pundits say that “metadata doesn’t matter.” They argue that police and intelligence agencies shouldn’t need probable cause warrants to collect information about our communications. Metadata isn’t all that revealing, they say, it’s just numbers.

But the digital metadata trails you leave behind every day say more about you than you can imagine. Now, thanks to two MIT students, you don’t have to imagine—at least with respect to your email.

Deepak Jagdish and Daniel Smilkov’s Immersion program maps your life, using your email account. After you give the researchers access to your email metadata—not the content, just the time and date stamps, and “To” and “Cc” fields—they’ll return to you a series of maps and graphs that will blow your mind. The program will remind you of former loves, illustrate the changing dynamics of your professional and personal networks over time, mark deaths and transitions in your life, and more. You’ll probably learn something new about yourself, if you study it closely enough. (The students say they delete your data on your command.)

Whether or not you grant the program access to your data, watch the video embedded below to see Jagdish and Smilkov show illustrations from Immersion and talk about what they discerned about themselves from looking at their own metadata maps. While you’re watching, remember that while the NSA and FBI are collecting our phone records in bulk, and using advanced computer algorithms to make meaning from them, state and local government officials can often also get this information without a warrant.

When President Obama said that the phone surveillance program “isn’t about” “listening to your telephone calls,” he was deflecting attention from the terrifying fact that there’s nothing currently stopping the government from amassing and data-mining every scrap of metadata in the world about us. He made it sound like metadata spying isn’t a big deal, when it’s pretty much the golden ticket.

Metadata surveillance is extremely powerful, and we are all subject to it, constantly. If you want to see something resembling what the NSA sees when it looks at your data, give Jagdish and Smilkov’s program a try. Then tell the government: get a warrant.

See also this post on Immersion by the ACLU’s Matt Harwood.