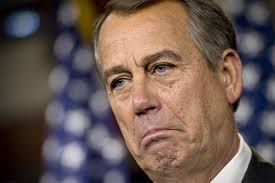 300,000 West Virginians didn’t have access to clean tap water for five days due to a massive chemical spill that exposed multiple failures in oversight and compliance, but House Speaker John Boehner (R-OH) thinks the federal government shouldn’t do more to protect citizens from future disasters.

“We have enough regulations on the books. What the administration ought to be doing is doing their jobs. Why was this plant not inspected since 1991?” he asked at a weekly press conference on Capitol Hill.

Saying he was “confident” regulations were in place to protect people, Boehner continued that “someone ought to be held accountable. We need to look at those regulations that are cumbersome, over-the-top, and costing the economy jobs. That is where our focus is, and should continue.”

The plant wasn’t inspected for more than two decades due to a loophole in regulations. Because the facility was only storing chemicals, not producing anything, inspections are not required under West Virginia law.

Gaps in chemical regulation may have impacted response to the spill, as well. Despite the fact a potentially hazardous chemical was being stored just over a mile upstream from a major water treatment facility, West Virginia American Water said they weren’t familiar with the chemical or how to handle its entry into the water supply. In a letter to Chairman John Shimkus (R-IL) requesting a hearing on the regulatory gaps exposed by the spill, Rep. Henry Waxman (D-CA) and Rep. Paul Tonko (D-NY) wrote, “As we begin to consider ideas to reform the Toxic Substances Control Act (TSCA), it is critically important that we understand how the law allowed a potentially harmful chemical to remain virtually untested for nearly forty years.”

Crude MCHM, used in coal production, “is one of 64,000 chemicals in use in the United States before 1979 that the 1976 law ‘grandfathered,’ imposing no requirements that anyone prove they are or are not safe,” Politico reported.

Boehner’s critique of environmental regulations is nothing new for the U.S. House of Representatives, which voted 109 times to undermine environmental efforts in 2013. And Boehner himself is the House’s top recipient of contributions from the coal industry, collecting $600,025 according to Open Secrets.