" ... The question becomes not whether developers are using the military to make games more 'realistic' (clearly that is the case), but whether the military is using the industry as its recruitment arm. ... " 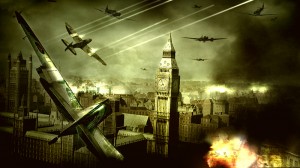 An interesting article by author David Sirota on the Huffington Post looks at the involvement of the military in entertainment. Sirota explores how taxpayers are subsidizing pro-war movies and video games, while at the same time the military is essentially vetoing movies that do not follow their strict pro-military message. Sirota cites a number of movies from the 1980s, such as Top Gun, as tools for military recruitment and the trend has continued into video games.

"As I show in my new book Back to Our Future, much of the video game industry was subsidized by the military and military contractors, and many of the earliest games were consequently martial in thrust. Think: Atari Combat and Missile Command, which then grew into a larger video game world that, as one Konami executive said in 1988, 'takes anything remotely in the news and makes it a game.' You could see that in Nintendo's Iran-Contra era game Contra just as you can see it in today's hits like Call of Duty. And in almost each of these games, the ideology of militarism (i.e. military action solving all problems) is reiterated and reinforced," Sirota writes.

The implications of this are simple: recruitment increases as a result of the pro-military image that is generated by Hollywood and the video game industry. I have seen this firsthand as developers frequently consult "military experts" and active-duty members during the development process. While the intent of the developers is to get a more realistic experience for consumers, the end-product is heavily influenced by the same people that make military decisions in real-life. War and death are often glorified in these products. The question becomes not whether developers are using the military to make games more "realistic" (clearly that is the case), but whether the military is using the industry as its recruitment arm.

From the Sirota article:

... Remember, the military has been working with filmmakers since 1927, when it helped produce Wings, the winner of the very first Academy Award for Best Picture. Pentagon involvement varied through the first two-thirds of the 20th century, but it always had kids in its sights. In the 1950s, for example, the military worked with Lassie on shows that highlighted new military technology and produced "Mouse Reels" for The Mickey Mouse Club, one of which showed kids touring the first nuclear submarine. As investigative journalist David Robb discovered, a Pentagon memo noted at the time that child-focused media "is an excellent opportunity to introduce a whole new generation to the nuclear Navy."

The 1970s saw far fewer Pentagon-backed war films for a public that was fatigued from Vietnam and its aftermath on the evening news. But according to The Hollywood Reporter, as Reaganite militarism began ascending, the 1980s saw "a steady growth in the demand for access to military facilities and in the number of films, TV shows and home videos made about the military."

For that access, the military began exacting a price. The Pentagon's focus on juveniles created the heavy hand it was beginning to use to shape popular culture in the 1980s. Increasingly, for filmmakers to gain access to even the most basic military scenery, Pentagon gatekeepers began requiring major plot and dialogue changes so as to guarantee that the military was favorably portrayed. In a Variety story from 1994, the Pentagon's official Hollywood liaison, Phil Strub, put it bluntly: "The main criteria we use [for approval] is... how could the proposed production benefit the military... could it help in recruiting [and] is it in sync with present policy?"

According to Strub, Pentagon-Hollywood collusion hit "a milestone" with 1986's Top Gun, a triumphalist teen recruitment ad about the navy's "best of the best," who, of course, never even think to ask the most basic of the basic questions. The movie's glaringly incurious characters and story were no accident. The script was shaped by Pentagon brass in exchange for full access to all sorts of hardware -- the access itself a priceless taxpayer subsidy. According to Maclean's, Paramount Pictures paid just "$1.1 million for the use of warplanes and an aircraft carrier," far less than it would have cost the studio had it been compelled to finance the eye candy itself.

As if that carrot-stick dynamic weren't coercive enough to aspiring filmmakers, the Pentagon in the 1980s expanded the definition of "cooperation" to include collaboration on screenplays as scripts were being initially drafted. "It saves [writers] time from writing stupid stuff," said one official in explaining the new process. ...

It’s an okay article, but to be frankly honest, you’d have to be either a real idiot, desperate, or perhaps even both, to actually join the military just because you played a video game………or even start being pro-war for that matter.

Honestly, there are more pressing issues to attend to.

Military Ramps up Recruitment of Poor