Starting today, New Yorkers may see advertisements at bus shelters and in newspapers warning that they could be living next door to a Nazi war criminal.

The advertising campaign is being spearheaded by state Assemblyman Dov Hikind, the son of Holocaust survivors who also represents a Brooklyn district with a large Jewish population

“Would you be a Nazi’s neighbor?” the advertisements ask.

The campaign, which comes almost 69 years after German forces surrendered, was inspired by the case of a man alleged to be a former Nazi camp guard who still lives in Queens, Hikind said.

“Jakiw Palij, an ex-Nazi slave-labor camp guard, continues to live comfortably in Jackson Heights, N.Y., because the United States has, thus far, found it difficult to get rid of him,” Hikind said in a statement. “Decent people don’t want Nazi neighbors.”

Hikind said he is in contact with the federal authorities, who he says continue to pursue the deportation of Nazi war criminals. He has also started a petition to remove all alleged Nazi war criminals from the country.

The Polish-born Palij has repeatedly denied the allegations, despite the U.S. Justice Department’s 10-year effort to deport him. He has been stripped of his U.S. citizenship, but has remained here because U.S. authorities say they have been unable to find a country willing to accept him. 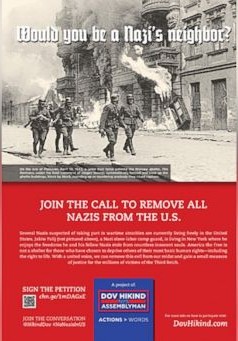 The Simon Weisenthal Center estimates that of the 3,000 to 5,000 Nazi war criminals who came to the United States, about 10 percent are still alive.

Many war criminals would be at least in their 90s now, but Hikind said using a Nazi war criminal’s age as an excuse to avoid prosecution is “ridiculous.”

“It’s never too late for justice,” he said.

The BBC reported last month that German authorities arrested three men, ages 88, 92 and 94, on suspicious of having worked as guards at the Auschwitz death camp.