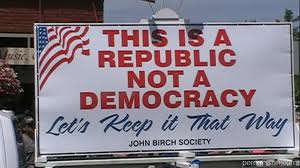 If you’ve ever wondered what happened to the John Birch Society, author Claire Conner of Dunedin can tell you. The radical right-wing group that was briefly a player in national conservative politics in the 1960s is back, under a different name: tea party.

She should know. Conner’s new memoir Wrapped in the Flag: A Personal History of America’s Radical Right is a fascinating inside look at the Birchers in their heyday and her story packed the house last month at the Tampa Bay Times Festival of Reading at University of South Florida St. Petersburg.

True believers don’t get any truer than Claire Conner’s parents, who sacrificed their livelihood and even their relationship with their children in the name of the cause. Her father, Stillwell Conner, was a founding John Birch Society member in 1958 and its Midwest recruiter. As a child Claire was pressed into service and at 13 years old was the Birchers’ youngest member.

She said it took years of incremental revelations on the correctness of the civil rights movement and seeing through the groups’ anti-government and Communist-hunting lies to break free of its control.

Eventually Conner, now a self-described progressive, realized “it’s good when the government does things. Old people having health care (Medicare) is a good thing. Social Security is a very good thing,” Conner said. Her parents didn’t believe in either — though they both accepted the benefits, of course.

Conner contends that today’s tea party is the modern-day rebirth of the John Birch Society. They share a worldview, she says. The same paranoid distrust of government. The same desire to protect the rich. The same cruel streak that blames the poor for their poverty and seeks to deny government help on that basis. The same willingness to believe all manner of bizarre claims against political leaders they don’t like.

A few days after President John F. Kennedy’s funeral, a national day of mourning that took place 50 years ago Monday, Conner talked to her father from Dallas where she was a college student.

“Don’t get emotional,” Stillwell Conner told his shattered daughter. “Kennedy was a traitor. The Commies killed one of their own.”

Claire’s father was parroting the distorted views of John Birch Society founder Robert Welch who also wrote that Dwight Eisenhower was a Communist — another blatant absurdity. This one drove a wedge between the formerly friendly Birchers and mainstream Republicans.

The Birchers’ agenda was to shrink government, except the military which should be massively powerful, eliminate New Deal programs, gut regulations, get out of the United Nations and hobble civil rights legislation. Sound familiar?

Beyond the ideological similarities, Conner points out that the John Birch Society and the tea party have something else rather startling in common: Funding by the Kochs.

Fred Koch, father to Charles and David, was an original John Birch Society member and part of Welch’s inner circle alongside Claire Conner’s father. Koch had made a fortune in the oil-refining business in Stalin’s Soviet Union, helping to build that economy. When he came home he spent his money on virulent anti-Communist and anti-worker causes and published a book contending that Communists would infiltrate the presidency.

His four sons inherited his fortune, and Charles and David expanded it. They are now worth a combined $60 billion. Through Americans for Prosperity and other sources, the Koch brothers have bankrolled the tea party, pulling the GOP to the right, making government the enemy and imbuing people like Sen. Ted Cruz and Rep. Michele Bachmann with destructive political power.

This spigot of money has given new life to the John Birch Society’s latent ideas for the transformation of America into a right-wing mecca. Anyone who wants to know what that means should read Claire Conner’s book for a peek inside.