By Stefan Schnoor and Boris Klinge 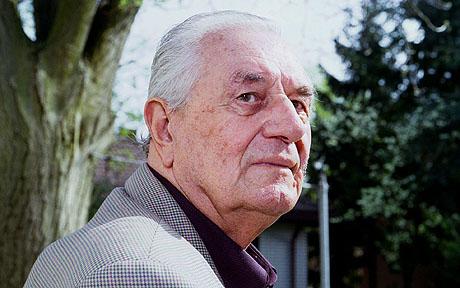 IN A Berlin suburb, just a few miles from Hitler’s Führer bunker is a small, white detached house with a grey metal gate and crumbling plaster.

It has, for many decades, been the home of Rochus Misch, the man who worked as Hitler’s bodyguard between 1940 and 1945. He is the last living witness of the dictator’s suicide and the only surviving member of the bunker’s staff.

Now 93, housebound and terminally ill, Misch says: “This is definitely going to be my last appointment with the press. I would now like to die in peace.”

There are no photos, busts or personal objects of Adolf Hitler in Misch’s home. “My wife Gerda threw everything away,” he says.

Misch was born on July 29, 1917, just after his soldier father died in the First World War. In 1920 his mother died of pneumonia so young Rochus was raised by his grandparents. When he finished school, he trained to be a painter. In 1937, during the physical examination for the army, the suggestion was made that he complete his compulsory military service in the Verfügungstruppe (Dispositional Troops), a precursor of the Waffen-SS. It would be four years of service free of fatigue duty and with automatic acceptance into the civil service.

On September 24, 1939, Misch was shot in the chest during the Battle of Modlin, 30 miles north of Warsaw in Poland. He tried to negotiate the surrender of the Polish stronghold and received an Iron Cross, Second Class for his bravery.

Misch’s conscientiousness was held in high regard and, after his recovery, his company commander Wilhelm Mohnke recommended him for the Führerbegleitkommando (Führer’s SS escort). “I was put in a car and taken to the Reich Chancellery in Berlin. The address: Wilhelmstrasse 77, the residence of the Führer,” remembers Misch.

“I was led in by Hitler’s chief adjutant, Wilhelm Brückner. I was scared of meeting the Führer in person. Adolf Hitler was standing behind the door as the chief adjutant opened it. I went ice cold.” Hitler gave him a letter to be given to his sister Paula in Vienna and so Rochus Misch set off on his first courier trip. “That was my first personal encounter with the Führer. He wasn’t a monster or a superhuman. He stood across from me like a completely normal man with nice words.”

Rochus Misch was Adolf Hitler’s telephonist, courier and bodyguard for five years. As a telephonist, he was responsible for Adolf’s communication with his generals. “Hitler’s telephone number at the Reich Chancellery was 12 00 50,” he says and is clearly proud of his good memory. In the SS he was in Adolf Hitler’s personal Bodyguard Regiment. When Misch married his wife Gerda in 1942, Hitler sent the couple a case of wine.

His past was not that of a Hitler fanatic. “I never had anything to do with the Nazi Party, I wasn’t in the Hitler Youth and yet there I was in the innermost circle, day and night. We telephonists and bodyguards were always around him. Another 22 steps past me and you were in his bedroom.”

As the war progressed Misch got to know his employer personally. “Hitler got cold very easily and often took a hot water bottle to bed with him,” he remembers. One particular incident remains crystal clear in recollection. “It was the middle of the night. In the belief that Hitler had already gone to bed, I opened the door to his living room to get something from there. He was sitting there, his chin buried in his hands, motionless, as if in a trance.

“He was staring at an oil painting of Friedrick the Great that was flickering in the candlelight. He always took it with him when he travelled. I felt like an intruder who had interrupted someone in the middle of prayer.”

However, Misch insists that he never heard anything about the mass murder of millions of European Jews in any of the phone calls he listened in on. “I completed my work, loyally and well and passed on news and messages correctly because I didn’t want to be thrown out. I was happy to not have to be on the front line. I adapted to the work there and soon Hitler was just a normal person to me, he was the boss.

“Just once I read one piece of news saying that an international committee controlled the concentration camps and that the reports were given to Count Bernadotte [a Swedish diplomat and negotiator on behalf of concentration camp prisoners]; that was all on that subject.”

Misch witnessed the attempted assassination of Hitler on July 20, 1944 and also the last days in the bunker below the Reich Chancellery before the Führer’s suicide. He was there on April 30, 1945 when Adolf Hitler said goodbye to everyone and was in the room next door when he shot himself. “Hitler had long since lost his confidence of a victory.”

He saw the uncovered corpse and also Eva Braun sitting dead in the corner of the sofa next to her husband’s body. Her head was turned towards him. “Her knees were drawn up to her chest, she was wearing a dark blue dress and had white ruffles on her collar.”

After Hitler’s death Misch was divided. He wanted to try to flee from the Russians but on the other hand he didn’t want to desert. He wanted to end his service to the “Führer, people and fatherland” in the proper manner. So, on May 1, 1945, he asked Joseph Goebbels if there was anything left for him to do. Goebbels left him with the words: “We have understood how to live, we will also understand how to die.”

On May 2, 1945, at 6am Misch disabled the telephone system in the Führer’s bunker and left through a window in the cellar but was taken prisoner by a Russian soldier.

Because of his closeness to Hitler, he was flown to the Soviet Union and incarcerated in the Moscow military prison Butyrka. He was often tortured prompting him to write to intelligence chief Lavrentiy Beria and request death by firing squad. “They wanted to beat me to death but because I was a soldier I asked them to shoot me. The letter is there in the archive,” says Misch.

After nine years in a Soviet work camp near the Urals and in Kazakhstan, his time as a prisoner of war was over and he was released in 1954. Until his retirement in 1985 he ran a shop supplying paints, paintbrushes, wallpaper and decoration supplies. “Since the death of my wife in 1997 I have lived alone,” adds Misch.

With the death of Hitler’s aide Otto Günsch, in October 2003, he became the last eyewitness from the inner circle of the Third Reich. The deaths of staff officer Bernd von Freytag-Loringhoven in 2007 and Hitler Youth courier Armin Lehmann in 2008, meant he had become the last survivor from the Führer’s bunker.

In 2012 his book The Last Witness will be filmed in Hollywood at a production cost of £12million. The contracts have supposedly been signed already but Misch thinks it is unlikely he will see the finished film.

“I don’t think I’ll live that long,” he says. “I can see death right before my eyes.”