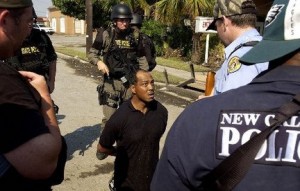 This story was reported by A.C. Thompson of ProPublica, and Brendan McCarthy and Laura Maggi of The Times-Picayune

During the turbulent days after Hurricane Katrina made landfall, New Orleans police shot 10 civilians , at least four of whom died, according to interviews and internal police documents.

Some incidents involving police were widely publicized and have prompted a U.S. Justice Department inquiry into the conduct of the New Orleans Police Department that has brought dozens of officers before federal grand juries to testify.

But a fresh examination of the post-storm period — a joint effort by The Times-Picayune, PBS “Frontline” and ProPublica, a nonprofit investigative newsroom — raises additional questions about the actions of police officers who shot civilians. It also reveals deep flaws in the department’s efforts to investigate its officers’ use of deadly force in the chaos after the storm.

Any time an officer squeezes the trigger, a few issues immediately arise: Was the shooting justifiable, a situation that left the cop with no choice but to use lethal force? Or did the officer fire on someone who didn’t truly pose a threat?

At the NOPD, each shooting is supposed to be thoroughly scrutinized to ensure the decision to shoot was proper. But in the Katrina shootings, the department performed only cursory investigations before exonerating their fellow officers, interviews and internal police documents show.

Cops who were present when the gunfire occurred took no statements from witnesses, or even their names and phone numbers. They repeatedly failed to gather important physical evidence, like weapons and bullet casings.

Weeks later, when homicide detectives began looking into the shootings, they did little more than speak to the officers involved. Interviews with the cops who fired shots lasted as few as seven minutes.

In one case, the lead NOPD detective examining a fatal shooting completed her 12-page report without reading the autopsy report. She did not realize the victim, a 45-year-old man, had been shot in the back, an injury that contradicted the officers’ version of events, sworn testimony shows.

More than four years later, the performance of the police after Katrina remains a matter of debate. Many officers who stuck it out during those days behaved selflessly, saving lives while working in the worst of conditions. However, Katrina also dealt the department’s image a blow, as hundreds of officers abandoned their posts, and some were spotted stealing from stores.

Many of the facts surrounding the post-Katrina police shootings are murky. But the available evidence suggests they are part of a broader pattern of violent encounters between police and civilians, one that is now under investigation by the U.S. Justice Department’s Civil Rights Division. In the week after Katrina, New Orleans police killed and wounded as many people as they do in a typical year.

A federal grand jury is looking into the death of Henry Glover, who died on Sept. 2, 2005, allegedly while in the custody of NOPD officers on the West Bank. His charred remains were discovered in a burned automobile near the 4th District police station. The NOPD did not launch a probe of his death until after news reports about it surfaced in late 2008.

Among the officers that probe is centered on, sources close to it say, is Capt. Jeff Winn, who commanded the department’s SWAT team when the storm struck and who has been widely regarded as a hero for his work during the storm.

Federal agents are also examining the Sept. 4, 2005, incident in which police officers on the Danziger Bridge fired on a group of civilians, killing two and injuring four more. Detectives in that case cleared their colleagues without collecting key evidence. And as The Times-Picayune has reported, witnesses supposedly interviewed by one police detective might not exist.

NOPD Commander Bob Young said the department would not comment on any post-Katrina incidents because of the federal inquiries.

“There’s a perception that because an investigation wasn’t thorough, that there is something sinister there,” said Capt. Mike Glasser, president of the Police Association of New Orleans. “I don’t think that’s a fair assumption.

Glasser thinks people who “sit in judgment” of the department’s actions need to be aware of the extraordinary challenges posed by Katrina.

He pointed out that floodwaters deluged police headquarters. Patrol cars floated away. Radio communication collapsed, and cell phone reception was spotty. With the department’s command structure crippled, the department splintered into smaller factions of officers who roamed the city, doing what they could to help people.

Normal police practices had to be jettisoned. “This was as close to an apocalyptic event as you can see,’’ Glasser said.

And attorney Eric Hessler, an ex-police officer who represents two officers who are at the center of the U.S. Justice Department’s probes, said flaws in the NOPD investigations of the shootings reflected the chaotic conditions after the flood. “There was no way to do a proper investigation during Katrina,” Hessler said, adding that it was “physically impossible.”

“Evidence wasn’t able to be collected and maintained and stored properly because there was no evidence room,’’ he said. “The NOPD evidence room was under 15 feet of water.”

Experts who reviewed the available case files at the request of reporters acknowledged the storm was devastating, but they said it was no excuse for the shoddy shooting investigations, which stretched into mid-2006.

“The quality of the police work was abysmal,” said Dennis Kenney, a former cop who now teaches classes about policing at John Jay College of Criminal Justice in New York. After reading the documents, Kenney said the shootings demand further scrutiny.

Looking into the past

Seeking to reconstruct events from those days, reporters spoke to law enforcement sources and witnesses to the shootings and obtained hundreds of pages of documents, including NOPD reports, autopsy records, court filings and internal affairs data. The journalists focused on four violent encounters between police officers and members of the public.

In three of the incidents — which will be detailed in the coming days by The Times-Picayune, PBS “Frontline” and ProPublica — police fired on citizens. A fourth possible police shooting identified by reporters was not described in any official documents. Its aftermath, though, was glimpsed by Times-Picayune City Editor Gordon Russell, who describes what he saw in an accompanying story in today’s newspaper.

In normal times, a whole series of protocols kicks in when a New Orleans officer fires a shot.

First, the officer is taken off the streets and given a temporary desk job. An NOPD homicide detective, typically a supervisor, promptly starts conducting interviews and collecting evidence, detailing all the findings in a report. Ultimately, the shooting is deemed justified or unjustified. The detective’s report is then sent to the district attorney’s office, where prosecutors in the screening unit decide whether to charge the officer with a crime.

The Katrina time period was anything but normal. The NOPD wrote very few police reports related to violent crimes or deaths from Aug. 29 to Sept. 12. No reports were written for murders, shootings or aggravated batteries, according to the department.

Several police sources have said then-Superintendent Eddie Compass instructed police on the scenes of officer-involved shootings to write up only a brief report and mark the incident as “NAT,” the police code for “necessary action taken.” This was noted in one initial report, which included a sentence that Compass “advised that a short gist was needed.” Compass declined to comment.

Homicide detectives didn’t begin scrutinizing many of the police shootings until weeks after the floodwaters had receded, and the investigations dragged on well into 2006. Former Lt. Jimmy Keen, who commanded the Major Case Homicide unit at the time, said it took time for news of the police shootings to work its way to his staff. And for a time, his detectives weren’t investigating anything — they were deployed to patrol for looters in eastern New Orleans.

Given the obstacles facing the city at the time, investigating police shootings wasn’t a priority, Keen said. When the detectives heard about the shootings, they went to supervisors to take over the cases, he said.

Detectives did not fault their colleagues for firing their weapons. Officers were cleared of any wrongdoing in the three shootings detailed in this series. And in all three cases, the district attorney’s office declined to press charges.

However, the official case files raise questions about the quality of the investigations.

A police officer shot Danny Brumfield Sr. in the back, something NOPD’s homicide detective DeCynda Barnes never learned. Her 12-page report erroneously stated that he was shot in the left shoulder. Under questioning in 2007, Barnes said she never read Brumfield’s autopsy report.

Two police officers shot Keenon McCann repeatedly for brandishing a handgun. But when officers approached McCann, they couldn’t find a weapon. NOPD detectives never questioned civilians who observed McCann’s shooting, and they didn’t know how many times he had been shot or where those bullets struck him, the homicide report indicates.

An officer shot Matthew McDonald in the back with an AR-15 assault rifle, killing the man. McDonald’s relatives, who live in Connecticut, said authorities told them he was murdered by another civilian. Family members didn’t know otherwise until they were contacted recently by a reporter.

Experts were sharply critical of how the NOPD investigated the shootings. A key issue, they said, was how detectives conducted interviews. Homicide detectives spent between seven and 12 minutes questioning the officers responsible for the shootings, according to transcripts of those interviews.

“That raises a red flag,” said Sam Walker, professor emeritus in the criminal justice department at the University of Nebraska at Omaha and author of several books on policing. “I don’t know how in the world you can do a shooting interview that quickly.”

Detectives also relied heavily on the stories told by the officers directly involved in the shootings, doing little to verify or corroborate those accounts. The experts faulted investigators for repeatedly failing to question civilians who witnessed the events.

Barbara Attard has studied police misconduct cases for 25 years, most recently as the independent police auditor for San Jose, Calif. She is now a consultant on police practices.

After reading the interviews in the two cases for which they are available, Attard said NOPD detectives “are just taking statements from the officers and going with that. They’re not trying to contact anyone else. … Somebody should’ve been collecting the names of witnesses and trying to verify the facts.”

‘Didn’t have the luxury’

Not all of the NOPD’s investigations of police shootings have been so limited.

In December 2006, for example, detective Harold R. Wischan examined the death of Gerald Arthur, who died after a scuffle with police during a drug arrest. Wischan’s investigative report is far more comprehensive than most of the post-Katrina reports.

When an officer shot Herman McMillan in 2008, detectives went door to door looking for witnesses. They questioned at least eight civilian witnesses, the homicide file shows.

Department supporters say the NOPD simply lacked the time or resources for thorough investigations into the post-storm incidents.

“On a normal police shooting you’d have a whole squad of detectives, which would be a homicide lieutenant, a sergeant, and at least three additional detectives,” said Hessler, the cop-turned-attorney who represents NOPD officers. “They didn’t have the luxury of that. You might be lucky if you had a sergeant. You didn’t have a crime scene photographer to photograph the evidence as it laid there. You didn’t have a crime scene technician.”

But Kenney, the professor at John Jay College, notes that detectives were still examining the post-Katrina shootings in the spring of 2006. By that time, he said, investigators could have at least done lengthy interviews with the officers involved and compiled other evidence.