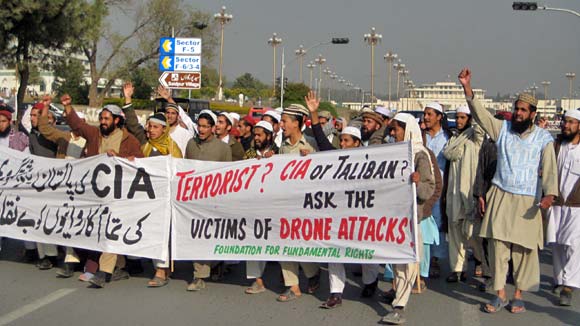 Over five years ago, Pakistani businessman Masood Janjua and his friend, Faisal Faraz, headed on an out-of-town trip from Rawalpindi, never to be heard from again. Though no charges were filed against them, and police and government officials said nothing on their whereabouts, others released from government detention centers reported seeing them in captivity. The two thus fell into the morass of the “disappeared” – a status conferred upon hundreds, if not thousands, of Pakistanis believed to have been grabbed by police or security forces, held in secret, but never charged with a crime.

Janjua’s wife, Amina, mobilized a movement on behalf of her husband that grew to encompass hundreds of families of missing Pakistanis, and lawyers, judges, students and others upset with heavy-handed tactics in the war on terror.

In a report to Congress in November, the U.S. State Department urged Pakistan to address claims that thousands of people, including civilians, separatist guerrillas and Taliban insurgents, are among those held without charges, tortured or killed. A cable, obtained through WikiLeaks and written by the U.S. Embassy in Islamabad in 2007, said, ” ‘Disappeared’ Pakistanis – innocent and guilty alike – have fallen into a legal black hole.” But the Amnesty International chapter in Ames, which has taken up the Janjuas’ cause, suggests the men are being detained at the behest of the CIA in violation of the Universal Declaration of Human Rights.

After the Sept. 11 attacks, the United States pressured Pakistan to crack down on extremists linked to the Taliban and al-Qaida. But human rights groups allege security forces used that as an excuse to go after political enemies, including separatists from the province of Baluchistan, at odds with the government.

Amina Janjua has shifted the focus of her campaign from Pakistan to the United States, and now claims the CIA was responsible for her husband’s abduction. She was quoted in a Pakistani newspaper saying, “Since 9/11 our institutions have been pressurized to take unconstitutional measures, follow illegal procedures and indulge in human rights violations.” She also called on the United States to release detainees from Bagram and Guantanamo. She was on her way to America in 2008 when, she has said, she got a call from the U.S. Embassy in Pakistan threatening to deport her if she boarded the plane.

A CIA spokesman said the agency does not comment on “reports of arrests made by foreign governments.” A State Department spokesman said in a statement that the United States has discussed allegations of human rights abuses with Pakistani officials and continues to monitor the situation. Referring to its 2009 report on Pakistan, which included NGO allegations of “extrajudicial killings as well as disappearances,” the statement said the agency and U.S. Embassy in Pakistan will continue to collect information on human rights concerns involving Pakistani security forces.

Asked why Amnesty believes the CIA was responsible, Ames chapter co-leader Mary Sand forwarded a letter from its South Asia coordinator claiming British lawyers were told so by a senior Pakistani army officer.

Two months ago, the United States refused to train or equip about six Pakistani Army units believed to have killed unarmed prisoners and civilians during anti-Taliban offensives.

We don’t know what, if any, political involvement Masood Janjua had, and allegations of CIA involvement in the disappearances are still speculative. Yet we know from history that the CIA is quite capable of it. We know the United States has a lot of leverage over Pakistan and wants extremists captured and disarmed. We have also seen tactics in the war on terror go too far. If there is credible evidence of CIA involvement in disappearances and/or deaths of Pakistanis, Congress must demand accountability.