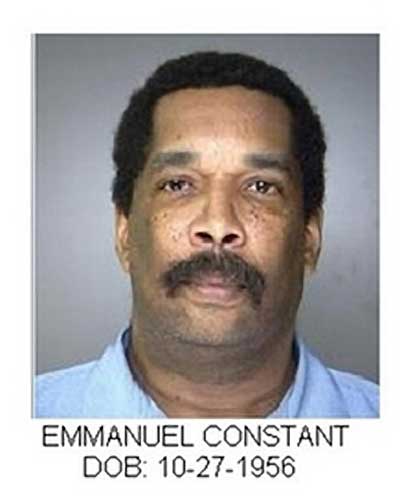 Just as the gangster Al Capone was finally brought down on tax charges, one of Haiti's most notorious death squad leaders looks like he's headed to prison for mortgage fraud, of all things.

Emmanuel "Toto" Constant's trial this week in New York caps a bizarre and ugly tale that doesn't reflect especially well on the United States' handling of some of Haiti's worst human rights abusers.

"Constant is a human rights violator as well as a crook, and he needs to be held accountable for all of that," said Jennie Green, a senior attorney with the Center for Constitutional Rights, a civil rights group monitoring his mortgage fraud trial which began Monday in New York.

Between 1991 and 1994, Constant led the notorious Front for the Advancement and Progress of Haiti, or FRAPH, responsible for enforcing a military junta that had overthrown President Jean-Bertrand Aristide. Human rights groups allege FRAPH systematically terrorized the country, killing, raping and torturing supporters of Aristide.

After President Clinton ordered U.S. troops to return Aristide to power in 1994, a warrant was issued for Constant's arrest. But he managed to slip out of the country, reappearing in New York City. Despite a 1995 deportation order, Constant remained in Queens, because U.S. officials said instability in Haiti meant he couldn't get a fair trial. It may also have had something to do with his claims of close ties to the CIA. Constant told CBS' 60 Minutes that the CIA paid him $700 a month for political analysis.

Constant was not alone. Several other military leaders received golden exile in the United States. Among them were Col. Carl Dorelien and Col. Hebert Valmond. The former head of military intelligence, Valmond had settled in Tampa as a Pentecostal minister. Dorelien lived in Port St. Lucie. In 1997, he won $3.2- million in the state lottery.

In 2000, a Haitian court convicted Constant, Dorelien and Valmond in absentia for their role in one of Haiti's most notorious massacres at Raboteau. Dorelien and Valmond were deported to Haiti in January 2003 and jailed. But Constant was allowed to stay and continued to live in Queens until he was arrested in 2006 on charges he bilked lenders out of $1.7-million inflating real estate deals with straw buyers.

Then, just when it looked as though Constant might spend some time behind bars for the mortgage fraud case, the Department of Homeland Security decided he ought to go home after all. Facing up to 15 years in prison, Constant agreed to a plea deal that would have allowed him to be deported with time served.

Sensing he would slip away again unpunished, human rights activists protested. A judge intervened and ordered that he stand trial.

What might happen if he were sent back to Haiti isn't clear. Currently no former FRAPH or military human rights abusers are in jail. Dorelien and Valmond escaped in 2004 when Aristide was ousted a second time. They remain at large, and no-one seems to be looking for them very hard.