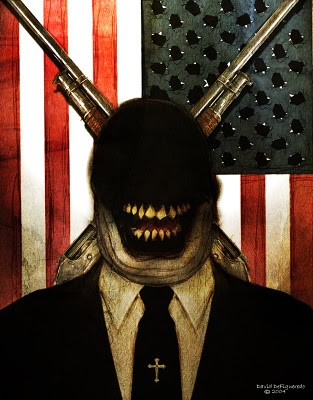 The forces of born-again corporate fascism are as USAmerican as apple pie!

VHeadline.com’s Washington D.C. based commentarist Chris Herz writes: From our British mother-country we inherited the notion that what was really required of any constitutional governance was a carefully crafted system capable of “muddling” through contingencies unforeseen by its 18th century framers.

This system was as good as any: It survived revolution, civil war and even two world wars. But it has long been foundered in the crisis of Empire.

What you on the outside see here in Sodom-on-Potomac is the successor state to the late, great republic.

Our national myths died in the fire-fights and body counts of Vietnam … and in the assassination of the best of our leaders. Our transformation into the ‘Corporate States of America’ was completed by the death squads of Central America.

It is marked by Special Forces, bravely fighting world-wide for dictatorship and repression.

It is marked by aptly-named Predator drones. Some fly the skies of Greater Arabia, others walk the halls of Congress and the White House.

All controlled from behind the scenes by sinister and evil people.

No matter how rich and powerful, our oligarchical rulers labor daily in the immense task of creating one lie; one new “truthiness” to re-enforce the collapse of yesterday’s political mantra. Their immense brittle fabric of irreality so painstakingly crafted by the weird churches, the army and the major media corporations covers our land like a shroud covers a decaying corpse.

A massive Department of Homeland Security is not of much use to a State which has lost the mystic chords which bind the patriot of today to those of past times who worked for our homeland in such unselfish ways. The corporate oligarchs at the summit of this class-ridden society cannot even understand altruism, and ridicule even the very notion.

Their law is enforced in this homeland by enormous armies of militarized police. Or abroad by a police-like military: Ever the loyal tools of state terror, their fruits those of full-spectrum disorder.

Watching as is my VHeadline duty, the splintering crash of the Bush regime and the feckless attempts of its Democratic Party ladies’ auxiliary to salvage something for the Empire from the ruins is a painful duty, yet an exhilarating one.

I must say across the havoc of war that we owe an inestimable debt to the true patriots of our contemporary world: Especially to the Iraqi people who are determined that no foreigner may rule their country and strip it of its one great resource.

Bravely they have refused to bow to the forces of a born-again corporate fascism, as American as apple pie. They have taken up such simple arms as are available to them and are showing the whole world the dark hollowness in the heart of the Empire. Their struggle is not only winning them a free country, but it is also destabilizing the whole project for a new American Empire, even in its own homelands.

The agony that the resistance has inflicted on the neo-fascists here is a cause for somber celebration.

We learn from the latest Internet reports that the major resistance organizations have united to form a unified political structure to seek international recognition for the national resistance and to prepare for the inevitable day when the Empire is driven from their country, when the heart-breaking work of healing a decimated nation can commence.

I for one wish them the very best of success.

To them, I invite our friends in Venezuela to extend every sympathy and every possible humanitarian and political assistance, for of military aid those who have humbled Mr. Bush’s empire have no need.

Indeed, the example of the Iraqis’ fortitude and courage in the face of the worst the US military and “intelligence” agencies can do, may be for the Bolivarian Republic the very best repayment for your sympathy and assistance. In this common battle against the empire Iraq has paid the bitter price of a million dead.

Were it not for their willingness to endure this horror the Empire would certainly have moved on to a new war with Iran, and then perhaps to the invasion of Venezuela.

And then perhaps may we all hope to live to see right here in Washington some new life breathed into our ancient constitution?

Perhaps it will yet be possible for the USA to shake off its corporate nightmare and disgraceful militarism: To once again be a good neighbor in a world community.

Previous Article
Ex-Bulgarian president in Taipei for launch of ‘Fascism’
Next Article
Pan’s Labyrinth … Lessons not learnt: secrets, lies and the danger of silence

Pan’s Labyrinth … Lessons not learnt: secrets, lies and the danger of silence
Jul 26