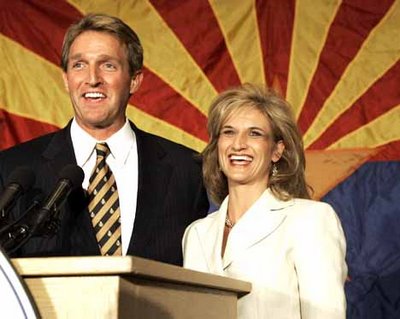 Congressman Jeff Flake and his wife, Cheryl, in 2006, speaking at a GOP rally in Scottsdale, AZ

It was the political equivalent of using a bazooka to zap a housefly.

Three Republican congressmen took time this week – amid a pivotal presidential campaign and on the doorstep of their national convention – to demand removal of a minor functionary on the very lowest rung of the party’s ladder.

What’s up with that?

What’s at stake, said U.S. Rep. Jeff Flake, R-Ariz., is the name and reputation of the Republican Party in a year that many analysts figure will be a tough one for the GOP.

Flake, along with Reps. John Shadegg and Trent Franks, sent a letter Tuesday to Tom Husband, Maricopa County Republican chairman, demanding that J.T. Ready be removed as a precinct committeeman in legislative District 18 because of his ties to the neo-Nazi movement.

That district, in west Mesa, is home to one of the state’s most bitter primary election battles. It pits state Rep. Russell Pearce, R-Mesa, a nationally known advocate of strict immigration enforcement, against Kevin Gibbons, a Mesa immigration lawyer who is Flake’s brother-in-law.

Pearce and Gibbons are running for a state Senate seat now held by the retiring Karen Johnson.

Pearce’s opponents have made hay lately over his alleged affiliation with Ready, who also is a staunch foe of illegal immigration and is openly aligned with White supremacist and neo-Nazi elements.

Flake said the District 18 campaign played no part in his decision to attack Ready.

Noting that recent voter registrations show Democrats and independents surging ahead of Republicans, Flake said, “You can’t grow the party when you’re rallying with J.T. Ready.”

Pearce, in fact, did rally with Ready in June 2007 when they appeared at the state Capitol to rail against illegal immigration. A campaign mailer sent by a group calling itself Mesa Deserves Better contains a picture of Pearce with Ready at the rally under the headline, “You wouldn’t associate with neo-Nazis, but Russell Pearce does.”

Pearce said earlier this month that at the time of the rally, he was not aware of Ready’s connection with the neo-Nazi movement.

“Nobody knew what he stood for,” Pearce told The Republic.

By June 2007, however, The Republic had already reported on Ready’s Nazi connections. In May of that year, Ready was on the warpath against Matt Browning, a Mesa police detective who had spent years investigating racist hate groups. In a presentation at the Capitol in early 2007, Browning said some extreme anti-immigration activists were little more than terrorists. …