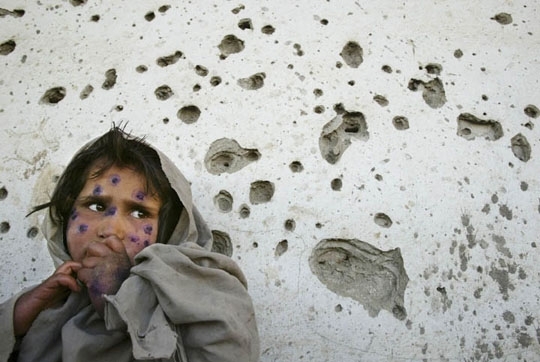 … After General Stanley McChrystal took charge of US/NATO Afghan forces last June, systematic atrocities escalated sharply after promises of kinder, gentler killing (an oxymoron), winning hearts and minds, and fewer civilian casualties as a “paramount” objective – now much higher the result of more than a fourfold increase in night raids, targeting civilians, including children, while they sleep.

It’s no surprise for a man this writer earlier called “a hired gun, an assassin, a man known for committing war crime atrocities as (JSOC) head” – since 1980 comprised of Army Delta Force and Navy Seal units, killers to reign terror on vulnerable targets, mainly civilians in Iraq and Afghanistan, and earlier in Vietnam as part of Operation Phoenix. More on that below.

The incident involved the February 12 killing of two pregnant women, a teenage girl, a policeman and his brother. “No one has claimed responsibility (and) A US official in Kabul refused to” say for reasons of national security, the usual cover-up for high crimes and misdemeanors prohibited for any reason.

This time, survivors were paid off for their loss, but family head Haji Sharabuddin wants justice, not money, and to get it “will….do suicide attacks and (the whole province) will support us.”

Starkey debunked the official story about the raid being a mistake. These were targeted assassinations, the same kinds rampant daily on the ground and by drone-launched missiles, mostly against civilians called Taliban or Al Qaeda militants.

Sayed Mohammed Mal, Gardez University’s vice-chancellor, told Starkey that he once thought these type raids safeguarded Afghans, what he now knows isn’t so after members of his own family were killed. “I realize I was wrong,” he said. “Now I accept the things (other) people told me. I hate (foreign forces). I hate the Government” that tolerates them.

According to the dead policeman’s son, Abdul Ghafar, “My father was friends with the Americans and they killed him….I want to kill them. I want the killers brought to justice.” Another victim’s father, Mohammed Tahir, said “They teach us human rights, then they kill a load of civilians. They didn’t come here to end terrorism. They are terrorists.”

A March 8 Starkey article titled, “Karzai offers families ‘blood money’ for sons killed in raid” told a similar story about other victims – “nine children killed (aged 12 – 18) in a brutal night raid” called a mistake – a cold-blooded one murdering children while they slept, shot in their beds, or dragged to another room and killed. Also, Abdul Khaliq, a neighboring farmer, was gunned down when he ran out of his house during the raid.

As for the reported successful US offensive, New York Times writer Richard Oppel’s April 3 article headlined otherwise, saying: “Violence Helps Taliban Undo Afghan Gains,” explaining “how little (control) Marines (have) outside their own outposts,” the Taliban as dominant as ever. So much so that “Even the Marines admit to being somewhat flummoxed,” Brig. General Larry Nicholson saying “Most people here identify themselves as Taliban,” stopping short of acknowledging widespread hostility to occupation.

Starkey’s April 19, 2009 article headlined “Botched Afghan raid kills mother and (her brother-in-law and three) children (one a new-born)” in Khost province – another “mistake” the Pentagon conceded, the same kind made daily, always against civilians, admitted only as damage control, the official lie, when cover-up doesn’t work.

A late December Kunar province massacre killed 8 children, dragged from their beds and shot in cold blood, some of them handcuffed. The Pentagon called them terrorists, making improvised explosive devices (IEDs). They were kids, students, in grades six through 10 (aged 11 – 17), eight from the same family. After speaking to their school headmaster, a government investigator said:

“It’s impossible they were Al Qaeda. They were children. They were civilians. They were innocent. I condemn this attack.”

In late February, nine more children were killed, aged 12 – 18. Most were “shot at close range while they slept,” another dragged from his bed and murdered, NATO initially alleging their involvement in IED making, then saying they entered a village and took fire so returned it, and finally admitting they were civilians saying:

“Knowing what we know now, it would probably not have been a justifiable attack. We don’t now believe that we busted a major ring,” something known all along but only acknowledged as damage control.

On March 22, Starkey headlined “US-led forces in Afghanistan are committing atrocities, lying, and getting away with it,” saying McChrystal-led forces “are rarely called to account because most reporters are too dependent on access, security and the ’embed culture’ to venture out” and learn the truth. Worse still, they’re paid to lie, cover up, or be fired.

Nor by a puppet leader. Yet fearing national opposition to his regime, he’s begun openly criticizing Washington saying, “They wanted to have a puppet government,” virtually admitting that US/NATO forces are invaders.

Paid Lying – What Major US and Western Media Do

Like in America, the entire Western media, including BBC and so-called National Public Radio and Public Broadcasting scrupulously suppress the truth. They rarely mention “embarrassing” incidents, and when they do it’s dismissively. They won’t say raids terrorize, bomb homes and wedding parties, massacre civilians, their wives and children, noncombatants called Taliban or Al Qaeda, to save villages by destroying them, to pacify Afghans by killing them, to bring tyranny papered over as democracy. If reporters did, they’d be fired.

“US special forces dug bullets out of their victims’ bodies in the bloody aftermath of a botched night raid, then washed the wounds with alcohol before lying to their superiors about what happened….”

The victims – two pregnant women, a teenage girl, a police officer and his brother, those killed in the above mentioned February 12 raid. After initial lies and cover-up, NATO finally “admitted responsibility for all the deaths for the first time last night,” yet continuing to deny a cover-up and saying no evidence showed inappropriate conduct. In other words, murdering civilians in cold blood is acceptable and appropriate. Apparently so as it’s ongoing daily.

On March 16, the ACLU filed a Freedom of Information Act (FOIA) lawsuit:

“demanding that the government disclose the legal basis for its use of unmanned drones to conduct targeted killings overseas. In particular, the lawsuit asks for information on when, where and against whom drone strikes can be authorized, the number and rate of civilian casualties and the other basis information essential for assessing the wisdom and legality of using armed drones to conduct targeted killings.”

At issue is using them against civilians, Admiral Dennis Blair, Obama’s Director of National Intelligence (DNI), saying US citizens will be targeted.

The ACLU sued the Defense, State, and Justice Departments after each provided no requested information “nor have they given any reason for withholding documents. The CIA answered the ACLU’s request by refusing to confirm or deny the existence of any relevant documents.” CIA wasn’t sued because the ACLU will first appeal its non-response to the Agency Release Panel.

Killer drones were used in Bosnia in 1995 and against Serbia in 1999. America’s new weapon of choice is now commonplace in Iraq, Pakistan, Yemen, Afghanistan, Somalia, perhaps elsewhere, and virtually anywhere targeted attacks are planned globally.

Officially know as unmanned aerial vehicles (UAVs) or remote piloted vehicles (RPVs), they’re used, among other purposes, for surveillance and combat equipped with Hellfire or other missiles for targeted killings.

At issue is their legality, given their use outside traditional battlefields for extrajudicial assassinations, a practice US and international laws prohibit. Yet reports confirm the Obama administration ramping up their use – why the ACLU and other human rights groups express concern.

CIA members “are not lawful combatants and their participation in killing persons – even in an armed conflict – is a crime.” US military forces may be “lawful combatants in Pakistan” only if its government requested them. It did not.

Drone attacks recently have averaged killing up to 50 civilians for each militant. As a result, drone use violates “the war-fighting principles of distinction, necessity, proportionality and humanity.”

Further, beyond targeted individuals, collateral killing is commonplace. “Drones have rarely, if ever, killed just the intended target. By October 2009, the ratio has been up to” 50 civilians for each militant. As a result, drone use violates “the war-fighting principles of distinction, necessity, proportionality and humanity.”

Yet they happen daily in Iraq, Afghanistan and Pakistan, and have escalated dramatically under General McChrystal for extrajudicial killings. Along with bombers and helicopter gunships, their use in Afghanistan (and North Waziristan, Pakistan) is so pervasive that anyone in the open or near targeted sites risks being killed – civilians, including women and children, most vulnerable.

One report said in the past two years the Air Force Research Laboratory embarked on a program to “build the ultimate assassination robot (described as) a tiny, armed drone for the US special forces to employ in terminating ‘high-value targets’ ” that most often are noncombatants.

On April 4, New York Times writers Jane Perlez and Pir Zubair Shah headlined, “Drones Batter Qaeda and Allies Within (North Waziristan) Pakistan,” referring to a “stepped-up campaign….over the past three months (casting) a pall of fear over an area (by) fly(ing) overhead sometimes four at a time, emitting a beelike hum virtually 24 hours a day, observing and tracking targets, then unleashing missiles on their quarry….” The ferocity of strikes got one “militant” to say, “It seems they really want to kill everyone….,” civilians, of course, most vulnerable.

It was a depersonalized murder program to remove opposition elements and terrorize people into submission – now used against Iraq, Afghanistan, North Waziristan, Pakistan, elsewhere, and perhaps one day coming to a neighborhood near you.

In 1975, Counterspy magazine called Phoenix “the most indiscriminate and massive program of political murder since the Nazi death camps of world war two.” Included were security-risk US military personnel and members of the South Vietnamese government. Before it ended, around 80,000 people were killed, yet it failed.

In the mid-1960s, it began as a CIA Counter Terror (CT) program that recruited, organized, supplied and directly paid CT teams whose function was to use Vietcong techniques, kidnappings and intimidation against the Vietcong leadership.

By 1968, it was expanded and called Intelligence Coordination and Exploitation (ICEX), then Phoenix, to neutralize the VC as top priority, much like McChrystal’s counterterrorism in Afghanistan and North Waziristan, and earlier in Iraq.

In Vietnam, a Civil Operations and Rural Development Support (CORDS) organization was established overseeing Phoenix. It was a gimmick doomed to fail, much like current Iraq and Afghanistan occupations aren’t sustainable in countries known historically as foreign occupier graveyards.

Phoenix was called Vietnam’s “grand illusion of the American cause,” the same miscalculation today no matter how long current wars continue, whatever amounts are spent, or how much more terror, mass killings and destruction lie ahead for people determined to resist and prevail. Given their past successes, odds are they’ll do it again, no matter the price.

Previous Article
Millions Heard it … but Now Beck Denies Equating Social Justice with Communism, Nazism
Next Article
Gerald Posner Claims He is the Victim of a ‘Conspiracy’