" ... By working to maintain the Bush-era coup government in Thailand, President Obama bears criminal responsibility for the current atrocities. If the Thai working class is unable to overthrow their murderous government, Obama will bear further blame for propping up a coup-government that must resort to prolonged, massive brutality to maintain its rule. ... " 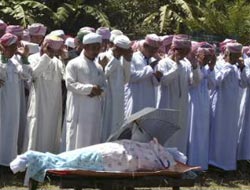 When the White House is quiet as protestors are butchered in the streets of Bangkok Thailand, suspicions are raised. Silence often equals complicacy. One can only imagine what the U.S.’s response would be to a Venezuelan government slaughter: the U.S. media and President Obama would loudly condemn such an act, in contrast to the muted response to Thailand’s blood bath.

The history of U.S.-Thailand relations explains why. During the Vietnam War, the U.S. used Thailand as one of the main “anti-communist” bulwarks in an area that included China, Vietnam, Burma, and other countries that were challenging capitalism.

Thailand was thus transformed into a U.S. client state and given money, guns, and U.S. government intelligence to battle Thailand’s “communists.” This relationship has equaled numerous Thai dictatorships that have a very bloody history, including the shooting of untold numbers of protestors that the Thai government named “communists,” or their modern equivalent, “terrorists.”

The U.S.-Thailand relationship began to sour when the recently deposed President Thaksin Shinawatra formed a closer relationship with China that included economic and military deals. Asia Times summarizes the consequences:

“Thaksin's willingness to promote defense ties with China came at the U.S.'s direct strategic expense and many observers believe that's one reason Washington's reaction to the September 2006 military coup that ousted a democratically elected government was so muted.” (November 7, 2008).

The U.S. government often overthrows “unfriendly governments” by bribing sections of their military, a fact discussed at length in Tim Weiner’s history of the CIA, Legacy of Ashes. When a U.S.-backed coup happens, the U.S. government and corporate media give tacit approval; whereas a howl of fury erupts when a coup happens against a U.S. puppet government.

“Many of the (2006) coup-makers were known U.S. allies, including alleged masterminds and former CIA-trained spy chief Prasong Soonsiri and Privy Council president Prem Tinsulanonda. Prasong has openly acknowledged his role in the coup … ”

The U.S. coup against Thai President Thaksin is at the root of the current crisis in Thailand. Large sections of the Thai working class and peasantry still identify Thaksin as their President and are demanding his return. They have resorted to extremely militant tactics to achieve their demands, which, if won, would amount to the restoration of democracy in Thailand. The New York Times adds:

“Thailand is convulsed by a bitter struggle between the nation’s elite and its disenfranchised poor, played out in protests that have paralyzed Bangkok for weeks and now threaten to expand.” (May 15, 2010).

President Obama has not said one word of support for Thailand’s poor, while his silence enables Thailand’s elite to murder protestors in the streets free of foreign pressure. The U.S. is the main purchaser of Thailand’s exports, while providing important economic and military assistance. One strong statement from Obama would deter Thailand’s elites from further killing. But he will remain silent.

So far, dozens of protestors have been murdered. But for Thailand’s U.S.-backed elite to successfully maintain their political dominance, hundreds if not thousands more will have to be slaughtered.

By working to maintain the Bush-era coup government in Thailand, President Obama bears criminal responsibility for the current atrocities. If the Thai working class is unable to overthrow their murderous government, Obama will bear further blame for propping up a coup-government that must resort to prolonged, massive brutality to maintain its rule.

Shamus Cooke is a social service worker, trade unionist, and writer for Workers Action (www.workerscompass.org). He can be reached at shamuscooke@gmail.com.

Can For Thai, Red Shirts, and Thaksin Liberate Thailand?