The CIA-Media War Against “Conspiracy Theorists”: Who Owns NEW SCIENTIST?

” … Reed Elsevier refused an interview request, but instead issued a statement to CMAJ saying that ‘The company does not regard this as a conflict of interest, though we respect the right of others, even our own editorial staff, to disagree. We remain convinced that the defence industry is necessary to the preservation of freedom and national security … “ 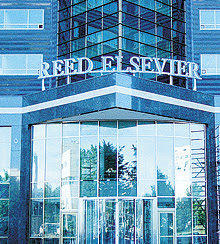 The July 11, 2007 issue of New Scientist ran a story by child psychologist Partick Leman, “The Lure of the Conspiracy Theory” (issue no. 2612), that finds, “one factor fuelling the general growth of conspiracy beliefs is likely to be that the internet allows new theories to be quickly created, and endlessly debated by a wider audience than ever.”

Leman equates the Kennedy assassination with fake moon landings, an old propaganda trick to confuse gullible rubes: “Unfortunately there has been little research carried out into what kind of events trigger conspiracy theories, who tends to believe them, and why. We do know, however, that people who believe in one theory are more likely to believe in others: there is a good chance that someone who believes the moon landings were faked will also believe that JFK was killed by a second gunman from the infamous grassy knoll. … “

Did the military-industrial complex – an arm of which publishes New Scientist – have nothing to do with the rampant spread of those “conspiracy beliefs?”

New Scientist is above this sort of thing … but what to make of the magazine’s publisher, Reed Elsevier, which puts out a number of top-shelf science and medical journals, including Lancet?

The editors of that respected journal haven’t exactly been enamored with its military-industrial publisher:

CMAJ: The Lancet, long an influential international voice on the adverse health consequences of war and violence, is again calling on its publisher to sell its arms fairs. But this time, The Lancet’s call is echoed by, among others, the BMJ, the Journal of the Royal Society of Medicine, the London School of Hygiene and Tropical Medicine and an online petition with nearly 1000 signatories.

Reed Elsevier’s science and medicine division, Elsevier, publishes 500 handbooks and journals, including The Lancet, while its subsidiary, Reed Exhibitions, hosts arms fairs around the world.

“We find ourselves in a situation where our parent company is filling an absolutely critical part in the arms trade. We’re horrified and embarrassed and we want them to stop,” says Horton, adding that The Lancet has had “endless” conversations with Reed Elsevier about the conflict.

Reed Elsevier refused an interview request, but instead issued a statement to CMAJ saying that “The company does not regard this as a conflict of interest, though we respect the right of others, even our own editorial staff, to disagree. We remain convinced that the defence industry is necessary to the preservation of freedom and national security and that these exhibitions assist in ensuring there is a licensed, regulated and open market to serve bona fide individuals and reputable companies in this sector.”

As early as 2005, a Lancet editorial “respectfully” asked “Reed Elsevier to divest itself of all business interests that threaten human and especially civilian health and well-being” (2005;66:868).

In March, The Lancet ended an 18-month silence on the issue by publishing and responding to 6 letters (2007;369:987-90) from, among others, the UK’s Royal College of Physicians and the London School of Hygiene and Tropical Medicine.

The Lancet editors responded to these letters by reaffirming their belief that arms exhibitions “have no legitimate place within the portfolio of a company whose core business concerns are health and science. This part of Reed Elsevier’s operation should be divested as soon as possible.” They also asserted that a growing number of Elsevier colleagues question Reed Elsevier’s continued involvement in arms fairs.

Figure. In March, 59 of The Lancet’s 83 editorial consultants sent a letter to Reed Elsevier’s CEO, Sir Crispin Davis (above), giving him 3 weeks to respond to a series of questions concerning the company’s involvement in arms fairs. Photo by: Courtesy of Reed Elsevier

On Mar. 23, 59 of The Lancet’s 83 editorial consultants sent an Open Letter to Reed Elsevier’s CEO, Sir Crispin Davis, giving him 3 weeks to respond to a series of questions concerning the company’s involvement in arms fairs. That letter, which is hosted on CMAJ’s Web site, was spearheaded by University of Ottawa law Professor Amir Attaran, a member of CMAJ’s editorial writing team.

CMAJ Editor-in-Chief Dr. Paul Hébert says “I believe it is morally indefensible for a medical journal’s owner to be involved in the arms industry in any way.” (See related article on page 1266.) “We urge our international editorial journal colleagues, particularly those at Elsevier publications, to protest against Reed Elsevier’s involvement in arms fairs.”

Renewal of the controversy was, in part, prompted by an editorial in the Journal of the Royal Society of Medicine (2007;100:114-5) by former BMJ editor Richard Smith, as well as an online petition, an academic boycott and the decision by Joseph Rowntree Charitable Trust to sell its £2 million stake in Reed Elsevier in protest.

The online petition, initiated by Tom Stafford, a lecturer in the Psychology Department at the University of Sheffield in the UK, has more than 1000 signatories (http://idiolect.org.uk/notes/?p=632), while the boycott, led by the Department of Mathematics at Ghent University in Belgium, has garnered about 70. The academics vow to stop sending papers to Reed Elsevier journals until the organization of arms fairs is discontinued (http://cage.ugent.be/~npg/elsevier/).

The BMJ called for a similar boycott in an editorial published on Mar. 17 (2007;334:547-8). It urged the scientific and health community to sign petitions, and for journal editors to “express their disgust at the company’s arms trade activities.” It concluded by asking researchers to “stop submitting their high profile randomized control trials to Reed Elsevier journals until links with arms trade are ended.”

Horton says, “I strongly oppose a boycott of The Lancet. This will directly damage the journal and I am sad that professional colleagues might inadvertently seek to do so. The best course is continued advocacy and dialogue.”

Horton stressed that The Lancet operates independently and ethically, within the Elsevier division.

“It’s a fantastic home for The Lancet and we want to stay there. But we and other publishing colleagues in Elsevier find ourselves in a difficult position that is incompatible with the values we try to practise every day. It’s unacceptable. We need them to go the whole way and get rid of their arms business.”

Elsevier Science and Medicine is Reed Elsevier’s most profitable arm with 2005 sales of $1.4 billion, 37% of the company’s total profits.
—————
http://news.independent.co.uk/business/news/article2455113.ece

New allegations on Reed Elsevier’s links to the most controversial parts of the arms trade have emerged, as peace protesters descend today on the AGM in London of the conference and publishing company.

According to a protest group, an arms fair organised by Reed in February in the United Arab Emirates invited the defence minister of Sudan, a regime that has been condemned by the US for sponsoring the “genocide” in Darfur.

The Campaign Against the Arms Trade also found that land mines and cluster bombs were on sale at the event. These revelations will increase pressure on Reed to cut its links to the arms industry. Reed organises trade shows for defence companies around the world, including a biennial arms fair in London.

Reed was condemned in 2005 by one of its own publications, the medical journal The Lancet, for dealing with arms manufacturers. It specifically deplored the marketing of cluster munitions, which it called “the worst kind of weapon”.

CAAT found that anti-personnel landmines were being sold by a South Korean company, Hanwha Corporation, at the Idex fair in Abu Dhabi. The company’s M18A1 claymore mines, which were being promoted, are described as “directional fixed fragmentation mines … for defence of bivouac areas … and against infiltration tactics”. Many countries including the UK have signed the Ottawa Convention against the use of landmines.

According to CAAT, a Russian business at the Idex event, Bazalt SRPE FSUE, was selling cluster bombs. The exhibition catalogue said: “FSUE SRPE Bazalt is the principal organisation in Russia which designs, develops and produces ammunition for Air Force (unguided air bombs including cluster bomb units)…”

A Reed spokesman said the Sudanese Defence Minister, Abdel Rahim Mohammed Hussein, was invited by the government of the UAE, but was unable to confirm whether he attended. He said Reed’s policy was that cluster munitions could not be marketed at its arms fairs but conceded that there was an “incident” of this happening at Idex 2007. “Wherever Reed operates, we comply with the [international] regulations,” he said.
——————
http://business.guardian.co.uk/story/0,,2093273,00.html

Reed said earlier it would sever its ties to arms fairs, bowing to pressure which included complaints from customers, shareholders and academics writing for its major titles.

The owner of trade and specialist publications such as Farmers Weekly and New Scientist had faced a multi-year campaign over its involvement in five defence shows, including one in London.

It now plans to pull out of the industry by the end of this year.

“Nonetheless, it has become increasingly clear that growing numbers of important customers and authors have very real concerns about our involvement in the defence exhibitions business.

“We have listened closely to these concerns and this has led us to conclude that the defence shows are no longer compatible with Reed Elsevier’s position as a leading publisher of scientific, medical, legal and business content.”

The Campaign Against Arms Trade, which has been organising weekly vigils outside Reed’s London headquarters, said the move put an end to the incompatibility of Reed’s involvement in the arms trade and its position as the number one publisher of medical and science journals.

“The decision shows that the arms trade is an abhorrent activity and that it has no place within a reputable business,” it said in a statement.

Reed had drawn particular criticism over its defence links from its flagship title The Lancet. The medical journal’s staff struggled to reconcile ties to the arms trade with a publication often covering the impact of war.

Editors of the 184-year-old journal had publicly voiced concerns about damage to its reputation and faced difficulty recruiting academic contributors who objected to Reed’s involvement in arms fairs. The Lancet issued a statement today saying: “The decision by Reed Elsevier to withdraw from military exhibitions will help us to build strong partnerships, which are so essential to our future.”

A host of internationally renowned writers including J.M. Coetzee, Ian McEwan and Arabella Weir, joined the campaign last year, in a public letter to coincide with the Reed-organised London Book Fair.

The authors said they were appalled their trade should be “commercially connected to one which exacerbates insecurity and repression” and they singled out the London fair.

“Military buyers were invited from some of the world’s most violent and repressive regimes,” they wrote. “At DSEi more than one company was found openly (and illegally) advertising torture equipment.”

Earlier this year, the Joseph Rowntree Charitable Trust sold its £2m stake in Reed because of concerns the publishing firm was stepping up its involvement in arms fairs despite the charity’s three-year campaign to make Reed break ties to the trade.

Describing the trade as “deeply unethical and irredeemably corrupt”, the trust slammed the arms fairs organised by Reed subsidiaries, which include Defence Systems and Equipment International (DSEi), held every two years in London and organised in association with the UK Ministry of Defence.

FTSE 100-listed Reed said today that defence shows accounted for less than 1% of group annual turnover. It said plans to pull out of the sector by the end of the year were subject to honouring its obligations to partners and customers and that September’s DSEi fair at London’s Excel centre would go ahead as planned. After 2007 the shows will not cease altogether. Reed will sell them on.

Reed had previously maintained it viewed the defence industry as “necessary to the preservation of freedom and national security” and that its exhibitions assisted in ensuring there is a licensed, regulated and open market.
————–
http://www.hoovers.com/reed-elsevier-nv-/–ID__91604–/free-co-factsheet.xhtml?cm_ven=PAID&cm_cat=BUS&cm_pla=CO1&cm_ite=Reed_Elsevier_NV