U.S. Fascists Engaged in a “Well-Coordinated, Hoover Institute-Engineered Movement to Reframe Liberalism as Fascism in the Public Mind” - The Constantine Report
0 SHARES

Media » U.S. Fascists Engaged in a “Well-Coordinated, Hoover Institute-Engineered Movement to Reframe Liberalism as Fascism in the Public Mind”

" ... As the tides were moving against the Republicans, it appears, they were already preparing a linguistic blitzkrieg against the incoming Democratic leadership, armed with Hitler, fascism and communism in tongue. ... Such hollow-pointed language ... debases debate for all of us, moving us away from fact-based discussions and toward meaningless, sniping insults. ... "

[Adam Bessie is an assistant professor of English at Diablo Valley College and a writer/researcher for dailycensored.com. He co-wrote a chapter on metaphor and political language in "Project Censored 2011."]

In 1946, a year after the end of World War II, George Orwell had already buried Hitler, at least linguistically, in his famous essay "Politics and the English Language": "Fascism has no meaning now except so far as it signifies 'something not desirable.'"

Orwell's point is not just that the word fascism was out of vogue, that the term was so commonly used as to render it hopelessly meaningless, but that this vaguely menacing meaninglessness encouraged "corrupted thought," thought which was antithetical to authentic political discourse and, thus, a free-thinking society. In Orwell's view, as we see illustrated so vividly in the dystopian Oceania of 1984, corrupted language leads to corrupted thought that in turn corrupts politics and, thus, creates an oppressive society.

And yet, while Orwell pronounced Nazi analogies DOA nearly 60 years ago, an undead Hitler still haunts our political discourse, as Media Matters found in a November 18 report "Fox's 'Nazi' rhetoric also comes straight from the top." The report catalogs the resurrection of Hitler and Nazism at Fox News by heavy hitters Roger Ailes, Glenn Beck, Bill O'Reilly, Sean Hannity and Ann Coulter, among others. While the report has produced all of the expected and righteous indignation about how we should bury Hitler, once and for all, what the report fails to note is that this is not just a standard feature of Fox News, nor is it an anomaly contained to a few outspoken talking heads, but more broadly, speaks to the hyperbolic echo chamber that is our normal political discourse, a coarse discourse that prevents us from authentic, thoughtful debate. 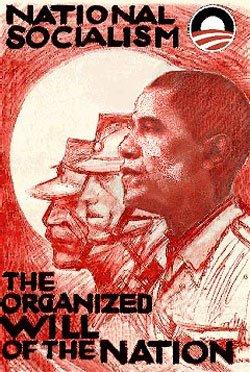 A scant two years ago, these Nazi comparisons to Obama - and other liberal policies - were so outlandish as to be considered laughable, as The Daily Show pointed out in November 2008. Jon Stewart satirized the trend with Absolutely Reasonable Hitler Comparison Analyst John Oliver about comments by Georgia Republican Congressman Paul Broun, comments then considered so far out of the mainstream political discourse that parody seemed the only way in which to properly address such an outlandish association.

Inspired by this segment in 2008, I researched the roots of this comparison in an article "Obama is Hitler: WTF?," finding that Broun was not at outlier, but part of a well-coordinated, Hoover Institute engineered, ideological movement to reframe liberalism as fascism in the public mind. National Review writer and Hoover Institute Fellow Jonah Goldberg popularized this perspective in his book Liberal Fascism, a trend that looks like it was coined by another National Review writer and Hoover Institute Fellow Thomas Sowell, in 2007. As the tides were moving against the Republicans, it appears, they were already preparing a linguistic blitzkrieg against the incoming Democratic leadership, armed with Hitler, fascism and communism in tongue.

And two years later, I am still surprised to find myself writing about this trend, which is now not only spouted by talking heads, but by "regular people" at Tea Party protests, on YouTube and Facebook, where 1,000,000 joined a page "praying for Obama's death," including an image of Obama as Hitler. Obama is Hitler? WTF! became the foundation for a segment of a chapter in Project Censored 2011." "Obama is Hitler: Vile goes Viral, (co-written with Mickey Huff and Frances Capell), in which we explored how the Hoover Institute, with a complicit corporate media, popularized this inflammatory exaggeration, which has become "standard right wing trope," according to Noah Lederman's FAIR report this March. 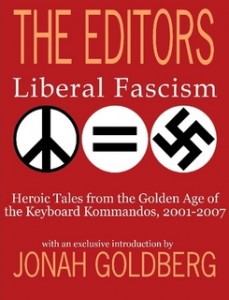 Yet, it's not fair to solely blame Fox News, nor the right in general, for keeping Hitler alive. Under Bush's tenure, many on the left were guilty of invoking Hitler's ghost to express their distaste toward his policies, a point that Fox News was happy to point out at the time. An ad submitted for MoveOn.org's 2004 political ad contest comparing Bush to Hitler got the most heat, as Salon.com writer Glenn Greenwald observed (MoveOn distanced themselves from the ad). Joe Scarborough, amongst many others, rightly dubbed this "political hate speech." And though Scarborough had Goldberg on his program to promote liberal fascism, he has otherwise stayed admirably consistent in this position, decrying Hoover Institute Fellow Newt Gingrich's claim that Obama's policies are like Hitler's as "sick" and "shameful," according to Media Matters. Scarborough also wrote an op-ed for Politico shaming Gingrich for his book To Save America: Stopping Obama's Secular-Socialist Machine, claiming that he is getting rich off "political hate speech," in selling the Goldberg-esque theory that liberalism is anything like fascism or the horrors of the Holocaust.

Here, I have to agree with Scarborough. Such hollow-pointed language, used by any of us, debases debate for all of us, moving us away from fact-based discussions and toward meaningless, sniping insults.

COINTELPRO: FBI Director Hoover let Killer of Omaha Policeman get Away with Murder 40 Years Ago

The "Integrity" of Andy McCarthy and National Review