Lord Haw-Haw’s Brother was in Contact with German Spy 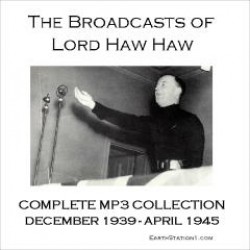 The brother of Lord Haw-Haw, the most notorious Nazi propaganda broadcaster, was also suspected of spying for the Germans, it was revealed today. Quentin Joyce, the younger brother of William Joyce, who was nicknamed Lord Haw-Haw, was interned after it was discovered that he was in contact with suspected German intelligence officers.

Security Service files released today reveal that Quentin Joyce was put under surveillance by MI5 after they realised he worked for the Directorate of Signals in the Air Ministry, a position that might allow him access to vital military information.

They grew doubly concerned after covert surveillance revealed he was in touch with a suspected German intelligence officer.

Some of the letters sent between the pair used phrases about stamp collecting that British intelligence believed were coded phrases.

At the outbreak of war, Quentin was arrested and interned. He was released in 1943 but banned from joining the armed services for fear that he would apply to become an officer and pose an even greater security threat.

His unrepentant brother William was later captured and brought back to Britain, where he was hanged for treason for his wartime activities by the executioner Albert Pierrepoint.

The Security Service was also watching a suspected German spy called Christian Harri Bauer, who was working undercover as a journalist in Britain from 1934, because of his friendship with the Joyce brothers. Their suspicions about him were confirmed when his landlady contacted police after discovering a suspicious letter in his wastepaper basket which read: “This is the list of British cruisers and aircraft … it is too difficult to get photographs.”

Bauer returned to Berlin in 1937, where he continued writing letters to Quentin Joyce, some of which were seen by MI5, although they were unable to intercept any of his replies. One letter that caused alarm was a request that Joyce collect as many “stamps” as possible relating to British Africa and send them to Germany.

Bauer also asked Joyce to use his contacts in government departments to find out if “your chaps at headquarters have anything against me” ahead of a potential return to Britain. He also showed Joyce around Berlin during a three-week visit to the city in September 1938.

By August 1939, when war with Germany was imminent, William Joyce fled to Germany. The Security Service believed it was too dangerous to allow Quentin to remain free and sought his arrest under the Emergency Powers Act. When they raided his London home they discovered original copies of letters sent to him by Bauer.

Quentin Joyce was adamant that he was innocent of spying for Germany, although he admitted wanting Britain to be on friendly terms with the Nazi superpower. “All my actions in the past must have shown me to be thoroughly patriotic and British in every way,” he wrote in a statement to the Home Office during the first weeks of his detention. He told interrogators his relationship with Bauer was innocent. His pleas were ignored because of the expectation of a German invasion and the danger of having Nazi sympathisers aid them.

Other documents released by the National Archives today include files on Brian Fitzgerald-Hume, a gangster who once boasted of throwing the dismembered body of his business partner from a plane into the North Sea in 1949, although he was never convicted of the crime.

Fitzgerald-Hume, a former RAF private, was being watched by MI5 because he was suspected first of having communist leanings in the late 1930s, and then of being a fascist sympathiser during the war years.

Other files show how British intelligence considered sending carrier pigeons with misleading information behind enemy lines in an attempt to confuse the German army in the lead-up to the D-Day landings.

Thousands of birds were sent into occupied France during the war equipped with information to help the French Resistance, but less than 10 per cent returned to their home lofts, and it was assumed that many had fallen into German hands.

Intelligence chiefs decided to make use of this by sending pigeons out with false information which, it was hoped, would lead the Germans to defend against D-Day landings in the wrong place, but the plan was never carried out.

Previous Article
Revealed: Diplomat’s Plan to give Europe to Nazis, World to Britain
Next Article
NPR Transcript: Breaking The Silence Of a Secret POW Camp (Parts One and Two)

NPR Transcript: Breaking The Silence Of a Secret POW Camp (Parts One and Two)
Aug 31