Postwar German Police Force Eyes Its Own Nazi Past

No longer disputed: the ties between some BKA founders and Nazis 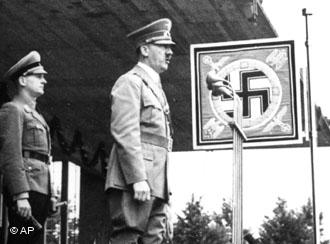 Germany’s Federal Criminal Police Office, or BKA, recently held a colloquium to examine the extent of its Nazi past — despite being founded after World War II. The BKA has moved toward examining the Nazi history of its founding leadership. On Wednesday it hosted the first of three seminars on the topic. The event was introduced by BKA President Jörge Ziercke. The colloquia focus on examining the role of ex-Nazi police officers who founded the BKA in 1951, and made up the core of its leadership into the 1970s. The BKA can be compared in scope to US Federal Bureau of Investigations (FBI) or Britain’s MI5.

Ziercke noted that the founding core of the BKA were some 48 members of the Nazi security forces known as the Reichskriminalpolizei, or Kripo. They became part of a new Criminal Police Force in the postwar British Occupied Zone, which later evolved into the BKA. According to Ziercke, of the 48, 33 had been SS leaders.

At the end of the 1950s, nearly all of the BKA leadership positions were filled with ex-Nazis or SS leaders. According to Ziercke, the police organization was rife with cliques and internal connections leading back to the Nazi era that helped with re-commissioning.

The colloquium aimed to examine the question of whether the Nazis’ notions on crime fighting were carried on after the war. Two more events are slated to take place in September and October. Should it be deemed necessary, an independent academic panel may be named to further look at these issues.

For a long time, the organization denied its Nazi past. When it celebrated its 50th anniversary in 2001, the Nazi era was hardly mentioned. In December, the interior ministry told a parliamentary query on the topic: “The BKA does not have a National Socialist past.”

This happened despite the publication of a book by a former BKA employee Dieter Schenk. Titled “The Brown Roots of the BKA,” the book argues that the organization had been founded by active Nazis.

Whether the BKA founders were Nazis or merely careerists is something discussed in the Schenk book as well as the current colloquia. More important, according to Schenk, is his belief that the political leanings of the BKA founders can still be felt in its policy, “in the half-heartedness with which it has fought against the radical right, anti-Semitism and anti-immigrant” elements in the country.

On Wednesday, Ziercke supported the BKA, using the colloquium to express his organization’s fight against right-wing forces in Germany.

He complained about the growth of the radical right, saying that hardly a day goes by without a neo-Nazi assault somewhere. Last year, the number of registered extreme-right, anti-Semitic and anti-immigrant acts reached a new high of 18,000.

He warned that the increase in right-wing extremism could lead to a climate of fear.

“This should really make us think,” Ziercke told the colloquium.

Aside from terrorism, right-wing extremism is the most important topic facing the police, he said. He stressed the importance of recognizing and protecting against extremist developments and right-wing hot-spots.

But in an ongoing discussion over data protection and new rights assumed by security forces in the fight on terrorism, Ziercke denied that Germany could be compared with a police state.

“I have to warn people to be careful about making such comparisons,” Ziercke told news agencies.

In recent weeks, comments from Germany’s conservative Interior Minister Wolfgang Schäuble caused a stir — especially on the subjects of secret online-searches and comments he made about selective killing of terrorists.

In early 2007, Ziercke himself was criticized for supporting the hotly debated online-data searches.