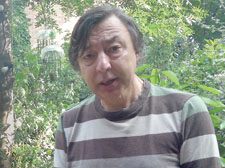 A MAN whose younger brother was killed in a Libyan terrorist attack on a French airliner in 1989 has welcomed the decision to release the “Lockerbie bomber” on compassionate grounds – claiming the CIA was responsible for the atrocities.

Charles Norrie, who lives in Canonbury Grove, has spent the last two decades researching the Lockerbie bombing after his brother died onboard UTA flight 772 to Paris from the Congo that came down over the Sahara desert nine months later in similar circumstances.

He believes the Lockerbie bombing – which killed 270 people in Britain’s biggest terrorist attack – was master-minded and executed by the Central Intelligence Agency (CIA). He said the convicted bomber Abdelbaset Ali Mohmed Al Megrahi – who returned to a hero’s welcome last week in Libya after being released from a Scottish prison – is innocent.

Mr Norrie, 58, said: “I was absolutely delighted when I saw Megrahi was released. I never believed he was involved in Lockerbie. It was the CIA. This is a stinker – they are up to their ears.”

While the television images of euphoric crowds greeting Megrahi’s release have caused anger within official British and US circles, those who have followed the case – including many of the families of the victims – do not believe the former Libyan intelligence agent was solely responsible.

His release has ended any hope of a full hearing that many relatives have campaigned for 20 years. Some believe Megrahi was later handed over to the Scottish authorities by the Libyan state as a sacrificial lamb to resolve a long-running trade sanctions dispute with the US.

But Mr Norrie’s unpublished book – A Tale of Three Atrocities – goes one step further in claiming CIA agents actually loaded a second “insurance” bomb on to the Pan Am 103 flight at Heathrow airport. His evidence focuses on details of a mystery break-in at Heathrow the night before the plane set off and a cover-up over a second explosion in the plane’s luggage hold.

Mr Norrie said: “I believe the Lockerbie bombing was an agreed deal after the Americans shot down an Iranian Airbus. The Iranians wanted revenge. They started out, I believe, threatening to bring down between five and 12 US aircraft. That would have scuppered any chance vice-president George Bush had of being president. So they approached the Iranians to do a deal that would limit the amount of political damage to Bush. The CIA gave the Iranians the job of building a bomb.” At this stage in the interview, Mr Norrie produces his own fake bomb he has constructed in his house. “Don’t worry, this isn’t live,” he said, adding, “The CIA told them to build their own bomb and they took on the task of finishing off the job by planting a second device.”

He added: “Quite seriously – I haven’t had a day in 18 years when I haven’t thought of Lockerbie.”

Mr Norrie, a computer programmer who also worked for Reader’s Digest, accepted a 1 million euros compensation from Libya last year for the death of his brother – an amount he describes as “far more than a life is worth”.

It brought the curtain down on an 18-year fight for justice over his brother, Tony, who was travelling on the UTA flight to Edinburgh via Paris from Chad, central Africa. They had grown up in Hayes and went to the same Quaker school. Tony, who was 36 at the time, was one of three English men returning home. He was due to take part in a gliding competition. The bomb killed 170 passengers and crew on-board. Six Libyans later admitted responsibility and, after a court hearing, the Libyan government accepted responsibility and agreed to pay compensation.

The motive was considered to be a revenge attack on the French for supporting Chad against Libyan expansionist projects. Libya paid out £6billion compensation last year that was divided between the families.

Nr Norrie said: “In September 1989, my brother was killed by a Libyan terrorist bomb. He was going to take part in a gliding competition.

“He had no family. He had a kind of clan family, godchildren, things like that. My relationship with my brother was fairly distant. But I had never forgiven people for trying to take away his life. It matters to me.”