The Jewish "Illuminati" controls the world -- and your mind. The Protocols of the Elders of Zion -- a nauseating racist propaganda tract with roots in Russia that circulated in Nazi Germany and claims that Jewish people eat Christian babies --  is "real."

"This is how the world works," he told me.

I was a wee bit skeptical, so Robertson proudly directed me to one of his blog posts at HuffPo, an ineptly-written political fantasy intended to break the "truth" to misinformed Gentiles: "Once upon a time," Robertson writes, "there was a village who [sic] unknowingly slept under the spell of enchantment that poured through a Box. Powerful magicians prayed before the Luminosity, a group of proclaimed elite, whom thought themselves better and of right, to receive the incantations through which the boxes cast spells and brought the Villagers to slumber." Translation: The Jewish "Illuminati" control the television medium; all of the studio heads in Hollywood do their bidding; consumers of media are mindless dupes of the Jewish Conspiracy. " The "Luminosity" "referred to these prescribed spells as the 'protocols.' Villagers were affectionately referred to by the elite and magicians as 'the Idiots.' Each protocol had the power to control feelings and thoughts. Thus knew the Luminosity, would Villagers' actions soon follow of their bidding. ..." In other words, Jews control our minds.

Now you know. Take it from HuffPo's own cultic, far-right Jew-baiter.

I had never heard of Roberston, but I've since learned that he manages a major Hollywood film studio funded by Iranian exiles once loyal to Mohammad Reza Pahlavi, the last Shah of Iran.

Many Iranians hate Jewish people, too, so the alliance makes a twisted sort of sense.

On the side, Steve Robertson also promotes a viciously anti-Semitic movie called "Zeitgeist." The movie, written and produced by Peter Joseph (an alias), also claims that the Protocols are a scrupulous portrayal of global power politics.

Robertson beamed proudly when he praised this rabid, anti-Semitic agitprop garbage. I did a quick Google search while he prattled, and noted that there were scores of reviews of the movie -- all condemned it as racist, right-wing crap. Yet Robertson was obviously proud to be associated with "Zeitgeist," leading me to conclude that he is merely a workaday Nazi lunatic, harmless if not for the fact that he has somehow wormed his way into the Hollywood establishment and writes for HuffPo.

"The movie has been downloaded 225 million times," Robertson told me. Are there that many brainless dupes "out there?" I wondered.

Tablet journalist Michelle Goldberg writes that "Zeitgeist: The Movie" is "steeped in far-right, isolationist, and covertly anti-Semitic conspiracy theories," and describes the Zeitgeist Movement promoted by Roberston as "the world's first Internet-based cult, with members who parrot the party line with cheerful, rote fidelity." Goldberg observes that the film propagates the anti-Semitic conspiracy theories of Eustace Mullins and Lyndon LaRouche. And the woo-woo movement that it has spawned is an "apocalyptic cult, centered around a doomsday-proclaiming film and an ideology filled with classic anti-Semitic tropes."

"Zeitgeist" claims that a cabal of "international bankers" (Hitlerspeak for Jews)  rule the world. The Scottish Socialist Youth call the movie "Shitegeist." (Their review includes a capsule history of the Protocols of the Elders of Zion for the uninitiated.)

So how is it that Robertson is in control of a Hollywood studio, rubs shoulders with some of the most famous producers and celebrities in the media capitol and writes for the Huffington Post?

We'll plunge headlong into the murky, geopolitical depths of this immense scandal next week. 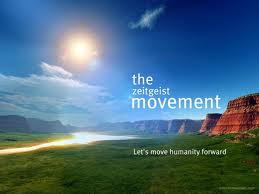